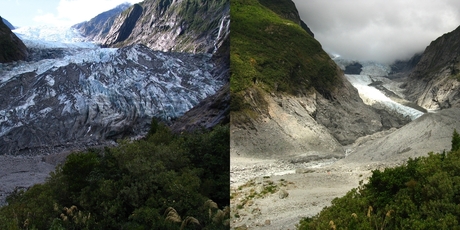 Ice levels in the Southern Alps dropped by almost 15 per cent in the past four years, new research from climate scientist Jim Salinger shows.

This 14.7 per cent volume loss – which takes in measurements from all the glaciers in the Southern Alps – was an ongoing response to regional warming, Dr Salinger said.

Since official records began in 1977, glaciers in the Southern Alps had lost 30 per cent of their ice.

Forty per cent of this was from the 12 largest glaciers.

Temperature data shows since the early 1900s the regional temperature has warmed by about 1C, and this directly contributed to the ice cover melting. To back this up, Dr Salinger and his colleague Trevor Chinn used research from Victoria University’s Brian Anderson, a senior research fellow at the Antarctic Research Centre.

According to Dr Anderson’s research model, the ice volume loss recorded since 1977 could be attributed either to the halving of the precipitation level on the South Island’s West Coast for the period or an increase in temperature of about 1C, Dr Salinger said.

“Precipitation actually increased in the latter part of the 20th century, whereas temperatures warmed by a degree so its clearly temperature which has been doing it.”

Further large losses of ice in the Southern Alps have been projected, he warned. Global warming research by scientists Valentina Radic and Regine Hock calculated a global decrease in ice volume of between 15 and 27 per cent by the end of the 21st century. This was based on global warming projections of 1.5C to 2.5C for the period, Dr Salinger’s book stated.

“The largest losses would be in the alps of Europe and Southern Alps of New Zealand.” The ice volume loss could be as much as 72 per cent here, the research showed.

“If this scenario comes to fruition, then a mere 14 cubic km would be left cloaking the Southern Alps of New Zealand” – a dramatic reduction since the “Little Ice Age” extent of around 170 cubic km, Dr Salinger said.

This is an interesting find but have you seen what has been going on in the north? here is an article for that 🙂 http://www.dailymail.co.uk/news/article-2415191/And-global-COOLING-Return-Arctic-ice-cap-grows-29-year.html

Word of advice, when you see something written by David Rose, or anything in the Daily Mail, this is the time to be skeptical. He has cherry picked 1 years data out of 35. Easily debunked here
http://www.youtube.com/watch?v=lH5D9P6KYfY
and here http://tinyurl.com/pxaf2r9
and if you can’t be bother watching or reading those, here’s a graph http://tinyurl.com/nwzzdsk

Another article which may explain a little more. http://www.forbes.com/sites/peterferrara/2013/05/26/to-the-horror-of-global-warming-alarmists-global-cooling-is-here/

There are so many PRATTs (points refuted a thousand times) in that article I don’t know where to start. You’ve clearly just googled “the world is cooling” and you’ve got any number of denier websites to choose from who are willing to tell you what you want to hear. Try putting that same search into google scholar and see if you can find a peer reviewed paper to back it up.
Look Kane, I’m not a climate scientist (neither are you I expect) so my *opinion* on the subject is irrelevant, as is yours. I accept the current science but I would be happy for it to proved wrong. But that proof if it exists, is going to come from a climate scientist not someone who “covers public policy, particularly concerning economics”…and it certainly won’t come from the Daily Mail. Try reading something you don’t agree with.