Home > News > NZ currently one of the windiest nations...

NZ currently one of the windiest nations on earth 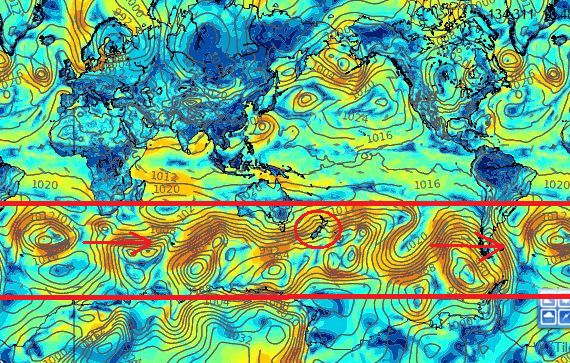 It probably comes as no surprise but right now New Zealand is one of the windiest countries on the planet as the Roaring 40s continue to blast across us.

This map – provided by weathermap.co.nz – shows the strong belt of westerlies across latitude 40.  The yellow, orange and brown indicates where the strongest winds are.  We’ve highlighted where New Zealand is and the northern most and southern most edges of this windy belt.

In contrast Europe, Asia, Africa and much of North and Central America have much lighter winds (indicated by blue).

An online poll at WeatherWatch.co.nz yesterday revealed that 66% of those who took part “hate” the current windy weather while just 15% said it was “OK, for now”.   Only 14% love it and 5% couldn’t care less either way.

Long range models show the westerlies will continue for the rest of the month but WeatherWatch.co.nz says there will still be some calm, sunny spells too – but they will likely be limited to less than 36 hours, unlike the spectacularly calm weather across New Zealand last week which lasted almost 7 days.

of course though the southern hemisphere is now entering the “equinox gales” period, due to there being the largest differnce between the temperatures in the tropics and over the south pole

whereas the northern hemisphere is in the opposite position,i.e autumn calm weather, i.e smallest difference between the tempeature at the equator and the north pole (in general terms)