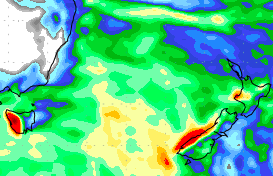 November 1st & 2nd kick off with a cold front crossing the country – and that then kicks off over a week and a half (at this stage) of westerly quarter winds. Remaining southerlies should fade out by Wednesday.

Like swells coming into a beach New Zealand will see ‘waves’ of cold fronts crossing the country over the next 10 days or so coming in from our west. Most of these fronts aren’t too aggressive – and most don’t bring dramatic temperature changes (unlike the cold change we’ve just seen in the last weekend of October).

The bulk of the air will be coming from the Southern Ocean so expect fairly average temperatures – but with a lack of southerlies the mornings coming up are about to warm up a little following a cold few nights. Tuesday morning may still see temperatures drop to just 2 or 3 degrees through parts of both islands but the westerly change will lift those lows across the week.

The westerly quarter winds means many regions will have a variety of nor’west, west and sou’west wind flows, bringing slight shifts in temperatures from day to day.

Rain is mostly focused on the West Coast with fronts weaker as they track into the North Island where air pressure is highest – the highs are mainly north of the country.

The theme for the next 10 days sees plenty of westerlies, a number of fronts – but most are weak – and no major temperature changes. Western areas may see normal to above normal rain while eastern areas see normal to below normal.