Northwesterlies build in the south tomorrow 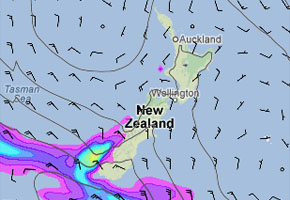 Tomorrow will yield the return of a northwesterly airflow building over the South Island ahead of a front to the south of the country, west to southwesterly winds will remain over the North Island with northeasterly breezes on the east coast.

Expect high cloud to cover much of the South Island with warm temperatures out east. Showers on the West Coast spread into Buller at night, rain develops later in the evening about Fiordland.

Over the North Island expect plenty of cloud in the west, there may even be the odd light shower or drizzle patch at times especially towards evening from Taranaki through to Northland. East of the Central North Island skies will begin to get brighter, the Bay Of Plenty will be a sunny. Gisborne through to the Wairarapa will also share in the circular yellow object in the sky.

On Friday the front mentioned previously will move northwards however it does weaken as it moves north. The most likely areas to receive rain being the West Coast of the South Island, Southland and Otago. Canterbury will get a few splashes overnight or early on Saturday.

The North Island looks to have similar weather on Friday as on Thursday however winds will be lighter and from the west, the east coast will have light winds and warm temperatures.

“southwesterly winds will remain over the North Island”
“Over the North Island expect plenty of cloud in the west, there may even be the odd light shower or drizzle patch at times especially towards evening from Taranaki through to Northland”