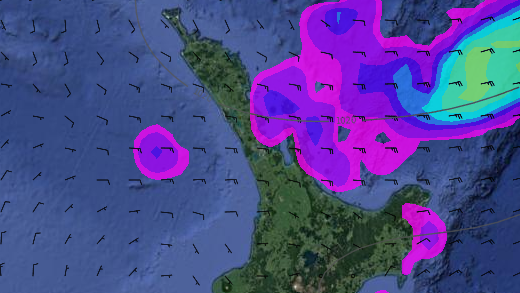 The rain clouds are finally breaking up around the upper North Island and while a few areas of heavy rain remains it is incredibly localised.

As of early Thursday afternoon heavy rain was affecting Great Barrier Island and had set in. This narrow area of rain is pushing westwards towards eastern Northland between Whangarei and Whangaparaoa.  Patchy rain and showers are also affecting Coromandel Peninsula and western Bay of Plenty.

A few spits here and there are dotting Auckland and Waikato but generally dry weather prevails today.

It’s also not so cloudy – with sunnier spells moving back to Auckland after a gloomy few days and sunny spells also moving into other upper North Island regions across today.

The air is also a bit warmer today – and warms up further on Friday, for some places it may be 4 or 5 degrees warmer than it was earlier this week.

By tonight showers should be retreating from the Great Barrier Island/northern Coromandel Peninsula and East Cape areas and tracking further out to sea.

Much of Friday will be dry for the upper North Island but a late shower is possible – and a few downpours on Saturday too.