North Island’s ‘Big Dry’ only getting bigger and drier 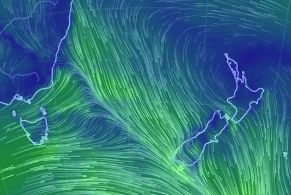 A developing Big Dry across the North Island isn’t at drought criteria yet but is heading that way according to WeatherWatch.co.nz as rainmakers continue to avoid the area. While some forecasts show a chance of showers and drizzle this Thursday night and Friday morning it won’t be enough to dent what has been forming since November last year.

In fact it was over two months ago that WeatherWatch.co.nz first raised the alarm of drier than average conditions in northern and eastern parts of the North Island. Some rain in January has been helpful to Waikato and Northland – but most of that missed Gisborne and Hawke’s Bay – or some eastern parts of Northland even.

With the arrival of February tomorrow we’re now entering the traditional peak of summer and there are no rain makers expected to reverse these very dry conditions in the next 10 days. Some longer range models, which aren’t so reliable, perhaps show a rainmaker for some eastern areas in 11 or 12 days time but our confidence is minimal about this, at this very early stage anyway.

For now the east of the North Island and Northland are both in an extended dry heatwave with highs in to the low to mid 30s at times (tomorrow’s high in Gisborne in the shade is 34 degrees!).

Last year New Zealand Government climate scientists and other global scientists forecast La Nina for our summer months – this should have brought rain in to these dry eastern areas however the La Nina was “weak” and is measured at the equator – simply too weak and too far away to bring in the rainmakers to NZ this time around.  With a continuation of this more ‘neutral’ pattern expected into late Summer and early Autumn it opens our country up to weather from all four directions….a somewhat distant silver lining for some eastern areas where the chance rain could land on any given week in February, despite it traditionally being the peak of summer.

However, for now it’s more of the same pattern we saw in late January but with one exception: the dry, sunnier days will be hotter.

What on earth are you on about? The national media has been based in, and biased towards, Auckland for many years. Auckland gets much, much more coverage and attention than the rest of NZ – although it is probably needed to help fuel their materialistic and ego driven lifestyle ; ) Looking at the weather details for the eastern NI, they are certainly having a dry, hot summer.