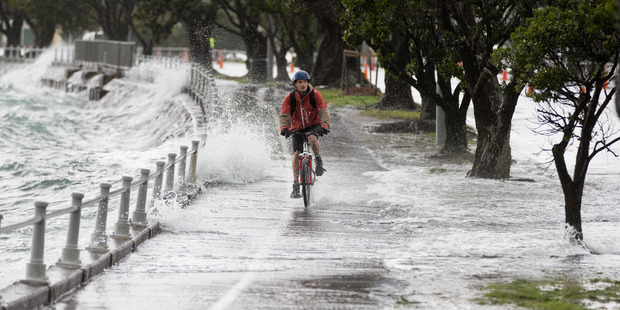 Auckland’s Tamaki Drive has been closed for just under an hour, after heavy rain and a big sea have combined to make driving treacherous.

Traffic’s being diverted to Ngapipi Road.

There’s also flooding around the motorway off-ramp at Fanshawe St.

Suggest avoiding Tamaki Drive due to flooding and waves pic.twitter.com/BCySzUEgJA

“Obviously the weather is marginal and where possible we’ve got signs up for motorists to take extra care,” she said.

“We’re closely monitoring the situation, we’re working with contractors to resolve issues as soon as we can.”

Flooding in the north near Brynderwyn and Otaika meant drivers should take extra care, she said.

It is taking about 40 minutes to drive into the city from Greville Rd, 45 minutes from Hobsonville and more than 90 minutes from Papakura, NZTA tweeted.

Waikato motorists are being urged to use extreme care on the roads and avoid unnecessary travel.

Hikuai Settlement Road into Hikuai, Tairua Road into Tairua are closed, and State Highway 25 between Tairua and Whangamata are closed.

State Highway 2 between Paeroa and Waihi could be closed due to rising river levels in the Karangahape Gorge.

There is flooding on East Coast Road to Kaiaua, Thames Coast Road and Kopu-Hikuai Road.