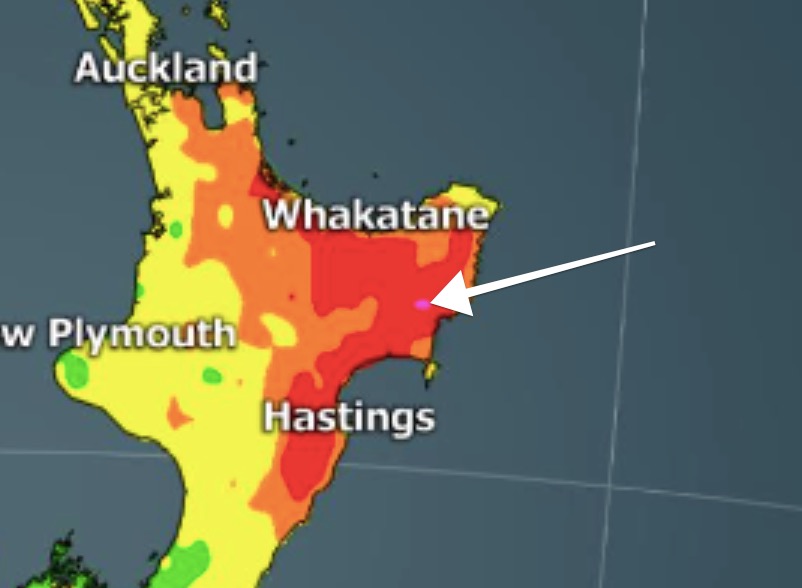 UPDATED Tuesday AM — For the first time in our 15 years WeatherWatch.co.nz not only forecast but reported a verified temperature of 40 degrees C in the North Island of New Zealand. Historically 40+ temperatures affect the eastern South Island. However a heatwave from Australia pushed hot air over the North Island today with WeatherWatch.co.nz last week suggesting Monday Feb 3 would be peak heat.

Te Karaka, inland west from Gisborne, reached 40C at 4pm. As of 5pm it was 38C and 6pm 37C according to IBM – who WeatherWatch.co.nz partners with.

In New Zealand “official” temperatures are taken by two commercial Government agencies, both MetService and Niwa – mainly at airports which in New Zealand are mostly coastal – and other near coastal locations. In weather “Official” simply means “Government owned” – it doesn’t mean more accurate for all locations. The sea breeze at these coastal locations can therefore remove over 10 degrees from the air (hence why you’re always hearing of certain NZ councils and mayors railing for new observations in their city, not at the airport).

Most “official” readings and Daily Highs come from coastal airports which can be over 10 degrees lower.

IBM has verified the 40 degree temperature recorded at Te Karaka that WeatherWatch.co.nz is reporting.

Interesting comment about the temperature recordings taken at locations in inland parts of the East Coast. When I was growing up during the 60s and working in the Woolsheds and doing Haybaling and Fruit picking, from time to time extreme temperatures were recorded, in Fahrenheit then, that would exceed 110F in the shade. Some of the Farmers and Growers would ask us to cease work until the temperature dropped. In the Woolsheds we had to keep going so that the sheep could get outside and get under the trees with the wool off their backs. Similar temperatures exist from time to time in Inland Hawkes Bay.
Some people question whether Niwa cherry picks certain locations.
P.S. 40 C is damn hot.

Hi there, really interesting historical comment and we’ve had a few people who can remember some pretty hot days in the 60s and 70s especially. We are worried about the cherry picking of locations with Niwa now competing with MetService, as we saw the other day when Niwa and MetService as “official Government forecasters” had two official temperature records for Gisborne. It happened again over the weekend in Whangarei, so it appears Niwa and MetService have two sets of records which will only get more confusing as time goes on as they commercially compete against each other. 110F is hot too, by the way!

…means standardized, not government owned, as laid out in World Meteorlogical Organisation (WMO) guidlines. I’m interested in this Te Karaka observation, though, as niether NIWA or Metservice, or Gisborne Council have a station there, nor is there anything amateur via Windy, Wunderground or even Metservice ‘Your Weather’. So what, exactly, have IBM verified?

No it doesn’t just mean standarised – as no weather station our company owns could be part of the ‘official’ NZ Government network even if we met WMO standards. So official means ‘Government verified’ when it comes to historical weather. IBM verifies their global data and just because you can’t see a weather station for free online doesn’t mean data can’t be verified for a specific location – as you say, the others don’t even provide a local temperature reading but we do.

Government Agency MBIE had an indepent review recently on Niwa and MetService and found “…that access to observational weather data in New Zealand is more restricted compared with some other countries, largely because of the state-owned enterprise (SOE) and Crown research institute (CRI) models that MetService and NIWA operate under respectively”.

Kind regards and thanks for using our entirely free service,
WW

If you want to claim that 40C was accurately measured at Te Karaka, you should be willing to provide details of the observing site and instrumentation.

This is not just about whether it is an “official” site, but whether proper guidelines were followed for the observing site, and for calibration of the instruments.

WMO provides extensive guidance on these matters, which is followed by any credible organisation, and not just National Meteorological Services and other agencies.. This is especially important where “record” temperatures are claimed.

Please refer to https://library.wmo.int/doc_num.php?explnum_id=4147 and, for instance, site and exposure guidelines in Section 1.3.3.

I am sincerely interested in more details of this Te Karaka observation.