Home > News > North Island has a shot at showers early...

North Island has a shot at showers early next week 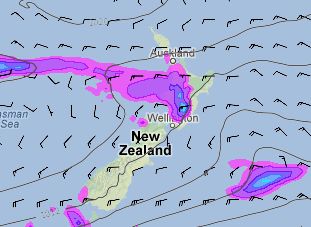 A previously dry forecast could be turning a bit wet for parts of the North Island.

A front is expected to work its way up the South Island on Monday, spreading a few showers about the western and upper portions of the Mainland.

At the same time, high pressure will be centred just to the northwest of the North Island which will keep things dry for Monday.

When that from moves onto the North Island on Tuesday, it will spread showers across the lower and western parts of the island in the morning.

Showers will become a bit more likely in the afternoon for the central North Island before the front washes out and high pressure regains control of the weather.

Dry weather is expected to return of Wednesday and Thursday.  Some light showers could work their way across the upper tip of the North Island on Friday.

Since records began at the Turitea met site near Massey University, Palmerston North in June 1928 the driest November has been 1989 with 23mm. With the total currently standing at 15.4mm it will take more than the brief shower that crossed the Manawatu plains in the past hour to surpass the 1989 total, thereby establishing 2012 as the new record holder. The weak fronts in the westerly flow aren’t grunty enough to deliver much more than drizzle at times.

The southerly on Friday is the biggest threat to the record being broken. Massey’s proximity to the Tararuas could see the usual shower bands peel off the ranges and across the Landcare Research site under typical southerly conditions here.

Who wants to take a punt?