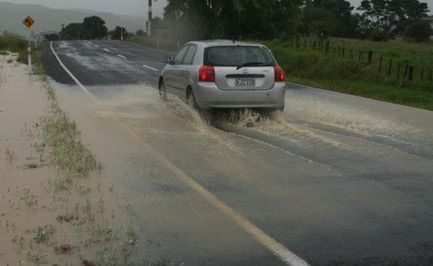 The deluge that mostly hit north of Auckland this morning continues to cross the North Island slowly – but has eased significantly in Auckland.

WeatherWatch.co.nz mentioned last Friday the risk for heavy rain and “potential rain warning conditions” for northern New Zealand early on Monday morning as a fairly weak front was predicted to be “boosted” by a sub-tropical element.

That happened, with downpours heavy enough to cause serious surface flooding on some roads – mostly north of the city.

WeatherWatch.co.nz reader Tracey Morris wrote on our Facebook page “Well my house is flooded basement bedroom and garage/laundry, and half of Warkworth is underwater”.

Despite some surface flooding in Auckland the rainfall totals weren’t extremely high – but what fell, fell in a very short time. Another WeatherWatch.co.nz reader, Andrew Blackie, says he recorded 45mm in Takapuna this morning.

WeatherWatch.co.nz says the heaviest of the rain is now pushing in to WAIKATO, KING COUNTRY and BAY OF PLENTY.

WeatherWatch.co.nz says this is absolutely classic spring weather with a windy west to south west change expected tomorrow, then easing, before the next front with wind arrives this Friday and weekend.

The torrential rain in the North Island continues to move southeast and is now clearing Waikato easing to showers in behind, despite the heavy rain up north the biggest 24 hour totals till 1pm today have actually been in the ranges of northwest Nelson or western Tasman Bay if you like. Up to 123mm has been recorded in the ranges there, Totaranui has recorded 55.6mm.

The intensity of the rain that moved across Northland and Auckland was heavier in the time it did fall though with rainfall rates of 30 to 40mm an hour having occurred, with peak intensities reaching 130mm an hour at times so this explains the flooding that has been reported. It was just moving along at a quicker pace and didn’t get to hang around too long.

The warmest spot in the country goes to Gisborne currently on 17.5 degrees with a northerly breeze.

Sunshine in New Lynn, blue sky patches in the sky to the north.