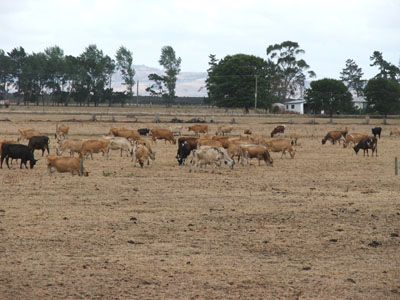 Dairy farmers in parts of the Waikato and Northland are drying off cows – despite milk production figures heading upwards and tracking well ahead of last year, according to Dairy NZ.

The Waikato Regional Council is monitoring conditions around the region closely, amid reports that soil moisture is worse than this time last year, when a nationwide drought was gripping the country.

Meanwhile, further north, some dairy farmers in Western areas of Northland are drying off early, in an attempt to manage supplementary feed costs and conserve already stretched pastures.

This is despite a 6 percent increase in overall milk production in the last 12 months, with the Bay of Plenty living up to its name, tracking 9 percent ahead of 2013 levels.

Dairy NZ Team leader, Craig McBeth, says despite these good volumes, and a high payout forecast, there will be many farmers working hard on their calculators in the coming weeks.

“The value of supplements can be very high if it allows cows to continue milking through until when it rains and the grass to grow again,” he said.

“If, on the other hand, farmers are feeding supplements purely to produce milk, and there is no timely rain come along to boost the grass growth, then the cost of the supplement can be relatively high relative to the milk that gets produced from it.”