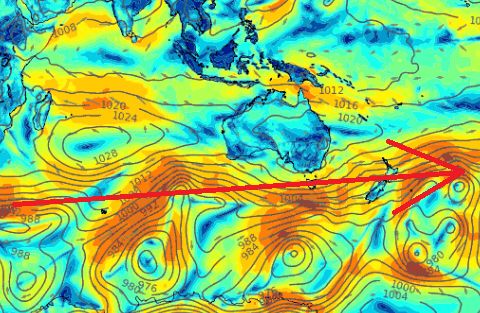 WeatherWatch.co.nz forecasters say there is no sign of any large high pressure systems settling across New Zealand for the rest of the month as strong spring westerlies continue to fire up.

Despite a lull in the winds today strong winds are set to return tomorrow and across the weekend with long range models showing no sign of let up.

Yesterday WeatherWatch.co.nz predicted 10 weeks of windy weather ahead but even weather analyst Philip Duncan says he’s surprised at the lack of anticyclones around us.  “Any highs that are spreading in from Australia are moving to the north of us – instead of protecting us they are helping shovel these strong winds over us.  These westerlies may even intensify towards the end of September according to one model”.

“While we expect spring to be unsettled we normally see highs still moving in from the west, but latest models show New Zealand remaining smack bang in the Roaring Forties for some time with no significant settled spells”.

It’s not all doom and gloom though.

Despite the windy weather overall there are still predicted to be significant dry spells, especially across eastern New Zealand.

The winds will also ease back from time to time, however WeatherWatch.co.nz says there is no evidence that we’ll see a repeat anytime soon of the stunning, calm, weather we had last week.

Its called “winter” with longer daylight hours though not like overseas continental winter standards the max temps barely budged since the shortest day.

Hi Geoff, I’ve got a fishing charter booked on the Kaipara for Friday starting mid morning. What are the chances of the wind dying down by then ?

Not at all,be WSW at this stage similar to today

“showers are likely to form about the Canterbury foothills and North Otago, and there is a moderate risk of thunderstorms forming there and possibly spreading to the coast about evening. These thunderstorms may produce localised rainfall rates of 10 to 20mm/hr and hail of 5 to 15mm diameter.”

What does weatherwatch say – Cantabrians are keen for a BIG thunderstorm that will rattle us from above, not below! Cheers.

Hi Geoff – yes we also think the southerly change could trigger a few thunderstorms and hail showers – but we aren’t expecting a repeat of what Wellington had.  Will have a much better idea as it starts to move over us tomorrow.  Our lead story tomorrow morning will be about the thunder risk so check back again from 5am.

And we wish you luck for a good rumble from above!!

At work here in hamilton and the wind is fair whistling about the building.