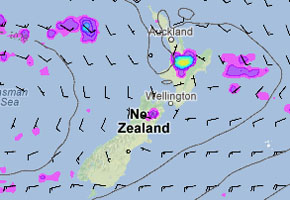 Next week is looking to be mostly settled with sunny weather, it won’t be completely dry through. A front does work it’s way north over the country on Monday and Tuesday but it is generally weak in nature and will mostly deliver drizzle to eastern areas, perhaps also some rain initially about Fiordland as it moves in there on Monday morning.

Wednesday will be settled for all with light winds and afternoon sea breezes in coastal regions due to an anticyclone pushing in from the Tasman Sea. Late afternoon and evening a few isolated showers may get going about inland areas of the upper South Island and also about hills and ranges of the inner North Island.

Thursday turns on another cracker, isolated showers are possible again about the inland parts of the North Island. The South Island is looking to remain mostly dry this time.

The anticyclone gets pushed to the north on Friday with a strengthening northwesterly airflow over the South Island and lower North Island, so the usual warm temperatures out east and cloud with showers in the west could be expected around the end of next week.