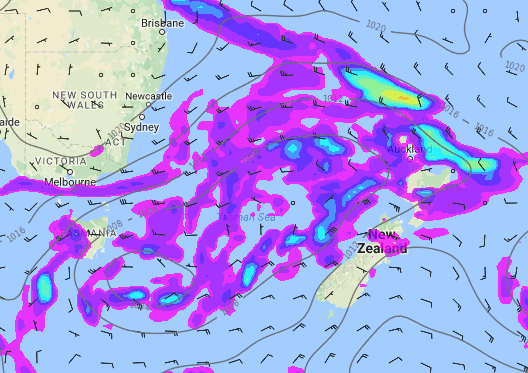 If you’re sick of the rain this forecast may not cheer you up – more rain and showers are coming along with plenty more low pressure.

The incoming lows are large and ‘lazy’ – not overly aggressive, but they do have the ability to produce more heavy downpours especially in northern and western facing regions of both islands.

A brief southerly may also bring in some snow showers to the ranges of Southland and Otago tonight or on Tuesday down to 300 or 400m generally, but this is not a major event.

Most of New Zealand is pretty wet right now. A recent poll in June at WeatherWatch.co.nz showed 40% of those who responded wanted July to be “drier than average” but so far that doesn’t look too likely, although some eastern areas may have a drier pattern if our weather continues to mainly come in from the Tasman Sea area and we get more westerly quarter winds.

A brief area of high pressure will cover New Zealand on Wednesday but later this week and into the weekend low pressure and rain looks again to be the main feature.

WeatherWatch.co.nz says next week looks similar with possibly colder southerlies in the mix too with the lows and wetter weather.

– Image / Forecast rain radar for noon Thursday shows a lot of low pressure and showers in the Tasman Sea moving into the country / Weathermap.co.nz