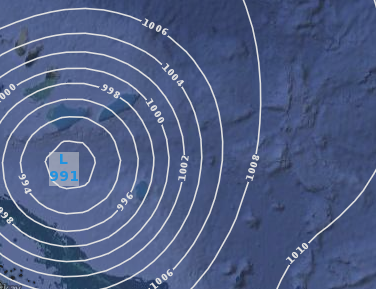 For years we’ve been trying to help the New Zealand news media stop misusing the term “weather bomb” but it appears they want clicks not accuracy.

A weather bomb is when the air pressure at the centre of a low drops a huge amount during the day. It has nothing to do with rain, or flooding, or damage – it is 100% to do with how much air pressure falls in one day. That is only what a Weather Bomb is.

The term “Weather Bomb” comes from “bombogenesis” this is an actual scientific term that New Zealand’s mainstream media has adopted in a new, misleading, way to cover absolutely any type of weather they deem as negative.

The technical term “Weather Bomb” (which is so rare it’s not even used yearly by us or MetService) is to describe that the air pressure has fallen 1 Hectopascal (hPa) an hour across 24 hours. So a weather bomb is when the centre of the low drops at least 24hPa in a day. Most normal storms don’t deepen like that.

The term weather bomb is used almost weekly now in New Zealand. To call something a weather bomb inaccurately is just as weird as calling a shower of rain a “typhoon” or a drizzle patch a “cyclone”.

With editors in our mainstream news media and even Auckland’s mayor not understanding and misusing this technical term we’ve decided here’s the best advice – rather than forever educating the media how about this, we’d rather say to you the public if you ever see “weather bomb” written in a news story double check it with WeatherWatch or MetService first because chances are it’s a misleading headline designed to simply get clicks.

You can read and learn more about the technical side of Weather Bombs here. (even Wikipedia has had to make an exception about New Zealand’s misuse of the term!)

What is a “Info Graphic: Subtropical Highway of Humidity?

Hi there, it’s from this news story.

Totally agree WW, I never take any notice of what the news media write about the weather these days as so far out from correct it is rubbish. Gets attention though doesn’t it which is what they are after never mind accuracy.

Keep up your great work.

Excellent reporting, thanks for that
So refreshing to hear someone suitably qualified telling it like it is.