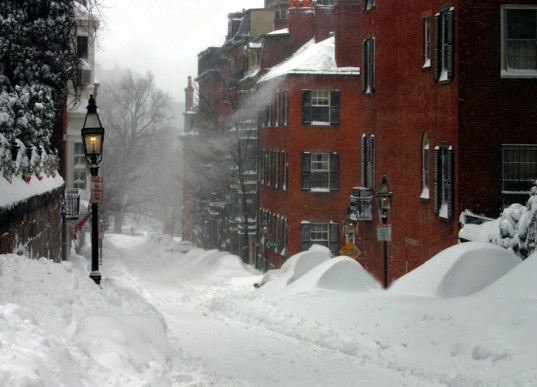 Conditions in the northeastern Unites States have begun to ease but not after huge dumps of snow have paralysed several states. Four deaths so far have been reported as a result of winter storm Nemo.

Record breaking snowfalls have occurred mostly in rural areas but Boston also has seen nearly a metre of snow fall in the city.

Hundreds of thousands of people are without power as severe winds caused havoc with powerlines and substations.

The mammoth storm that stretched from the Great Lakes to the Atlantic dumped very heavy falls of snow across the Northeast. Coastal blizzard and flood warnings were in effect as the storm moved slowly eastward out to sea.

The storm centered its fury on Connecticut, Rhode Island and Massachusetts, with the most snow in Milford, Connecticut.

Authorities ordered non-essential vehicles to stay off roads to allow snow plow crews to clear them. The ban left normally busy arteries such as Interstate 93 in Massachusetts nearly deserted.

Obviously with the snow comes freezing conditions and this could last several days as temperatures remain icy throughout much of the week.

As Nemo slowly departs, another winter storm named Orko has developed in the far west and is expected to hot the Great Lakes with significant falls of snow to the region.