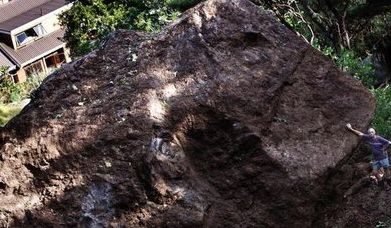 Harvey Gadd was inside his Northland home when the building gave “an almighty shake that felt like a truck had run into it”.

Mr Gadd at first thought the loud rumbling he could hear was a tornado. But when he looked outside he realised there was no wind because the trees were not moving.

He could hear his wife, Liz, screaming for him to get out of the house.

She was in the garage of their Reotahi home, looking up at Mt Aubrey, where an enormous piece of rock weighing hundreds of tonnes had fallen from the turreted top and was plunging down the steep side of the hill toward them.

She uses a stick to walk and “doesn’t do hasty”. But she was ready to sprint out of the path of the behemoth once she had warned her husband.

But by the time Mr Gadd got outside the danger was over. The huge rock came to rest about 40m above the house, a big cloud of mud and dirt was settling over a wide area and a broad gouge marked where the rock ploughed down the cliff face.

It was 5.25pm on Saturday. Birds had been chirping when the drama began.

Now all was quiet and the Gadds realised the end of the world had not arrived after all.

Mrs Gadd said she couldn’t stop shaking and “had to have a whisky”.

Mr Gadd, 70, a former Coastguard education officer, showed around neighbours who arrived to see what all the noise was about.

One of them said he had been close to the epicentre of the Christchurch earthquake in February and the shake which the falling Reotahi rock had given his house on Saturday was much worse.

The big rock fall was attributed to erosion. Small boulders and mud washed down the hill after more than 320mm of rain fell on Reotahi in a week in late January.

Mt Aubrey takes its name from Harcourt Richard Aubrey, who became the Resident Magistrate, Collector of Customs and Emigration Officer for Whangarei and Postmaster for Whangarei Heads in 1848.

When the Ngapuhi ancestor Puhi was heading north from Whakatane in the Matatua waka the Old Woman (another Whangarei Heads peak) had called him to pay his respects to Manaia. When he didn’t, she predicted he could get hurt.

The couple, who moved to Reotahi from Torbay in Auckland last September, were both resolute yesterday to remain in their house, which has a fine view of Marsden Pt.