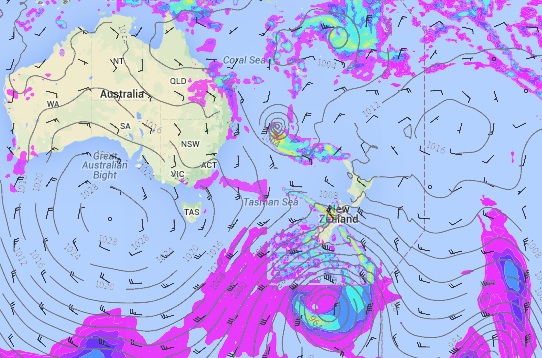 Ex tropical cyclone Ola will have its final say on the country’s weather tomorrow, as it moves across the upper North Island, moving northwest of Northland in the morning, before weakening further and sliding southeast and away later on.
The rest of the country is under a west to southwest airflow, leading to a mixed bag weatherwise.

The West Coast is looking at showers for much of the day, steadying in the evening – the same as Southland and Central Otago.
Coastal Otago meanwhile will have a brighter start, though cloud will thicken in the afternoon, producing the odd spot of rain.
In the evening, winds will change to strong southwesters, will showers becoming heavy – maybe even producing hail and thunder.

Canterbury looks fairly good for much of the day, not till overnight does a gusty southwest change move in – bringing showers.

Marlborough and Nelson have sunny areas and some cloud, and the chance of a spot of rain about Marlborough in the evening.
Overnight, a southwest change brings a few showers, most likely about southern Marlborough.

Fairly dry about the lower North Island, with Wellington seeing morning cloud break to sunny areas around midday, along with breezy northwesterly winds.
There’s a chance of a brief shower in the evening, then overnight a strong southerly change brings a greater risk of showers.

The eastern and central North Island, along with the Waikato, will all see showers at some point during the day, while the western side of the island may only experience a few spits here and there.

The upper North Island has rain or showers, though these should mostly clear in the afternoon as southwesterlies freshen.