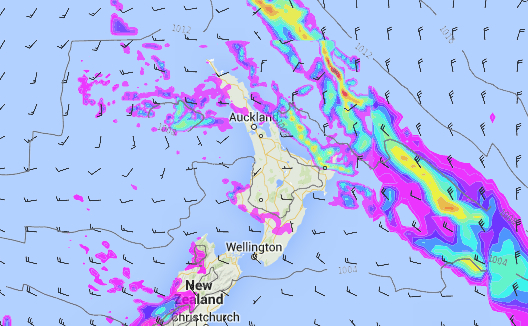 The main risks today are all associated with the departing rain-bearing front, which will move off to our northeast in the afternoon – but not before causing a few problems(!)

Heavy falls can be expected from Northland down through to the Waikato, as well as northeastern parts of the Central North Island, the Bay Of Plenty and East Cape (Gisborne ranges).
This rain should then ease around midday for most, though perhaps more mid to late morning for the Waikato and CNI.

Rain may hang about the ranges of Gisborne and East Cape till evening before finally easing, however.
Eastern Bay Of Plenty may get the heaviest rain from this front – so it’s an area to watch, not just due to the intensity but the length of time rain hangs over the area, and the ranges of east cape.
At this stage, the government warnings suggest there will be between 120 to 180mm until 6pm, with peak intensities of 10 to 15mm per hour.

Hi Guys. Received a nice drop (20mm) last night with the radar showing another dose coming in very soon. Sorely needed here near Waipu. Your forecast comment to me the other day pretty much spot on thanks Aaron.