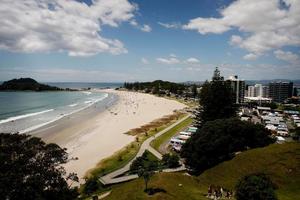 New Zealand’s first artificial surf reef now appears to have been a complete wipe-out, with authorities deciding to remove the $1.5 million development at Mt Maunganui just a decade after its construction began.

Bay of Plenty Regional Council today announced it had decided to remove the reef to reduce risk to swimmers near Tay St, flagging the end of the controversial and long-running development.

The reef was hoped to have provide world-class waves for up to 50 surfers at a time when the concept was touted in the late 1990s.

It was to be part of on-going research into artificial reef development by the University of Waikato, as well as providing a superior surf break for surfers, but the structure was never fully completed.

The five-year consent term granted lapsed in 2010 and the regional council needed to consider options for its future management.

The council said the reef – built from 2005 to 2008 with donations from the public and community funding groups – had “never functioned as intended”.

The reef had drawn criticism, with surfers saying it did not provide the intended surf breaks, and surf lifesaving organisations concerned it was creating dangerous rips for swimmers.

The structure was designed by Raglan-based ASR Limited, which has since gone into liquidation and was also criticised over its design of the Boscombe surf reef, on the Dorset coast in the UK.

“It’s also generated some unforeseen effects, including creating a large scour hole which affects waves and currents, increasing the frequency and intensity of rips which pose a serious risk to swimmers in the popular Tay St area.”

The council had commissioned a specialist report to consider the effects on the beach, swimmer safety, navigation safety, surfing values, cultural values and ecology.

Removing the largest geotextile containers at a cost of about $60,000 would likely eliminate health and safety and environmental issues, it said.

While the reef trust had told the council it would like to see the reef completed to achieve its original intent, it was not in a financial position to maintain, manage, re-consent or complete it, Mr Grogan said.

The regional council had to consider whether the reef could be left in its current state, or whether hazard or environmental issues meant it needed to be repaired or removed.

There were also significant costs involved in leaving the reef where it was, risks to swimmers at Tay St beach and adverse environmental effects, Mr Grogan said.

He said repairing the reef could pose more issues, including altering coastal processes, changing currents and exacerbating risks to swimmers.

Work was likely to start as soon as possible, following selection of a preferred contractor and weather conditions permitting.

Seemed doomed to start with and has failed to function as they thought!