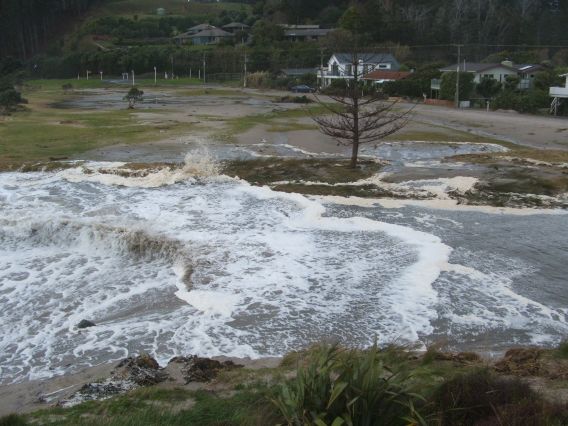 King tides predicted for Auckland starting next weekend should not pose too much of a problem – providing the weather stays fine.

The series of very high tides begins on Sunday 28 February, peaking on March 2 or 3, when there will be a 3.6 metre high tide.

Auckland climate scientist Jim Salinger says if the tides coincide with low pressure weather systems we could experience flooding, but the latest long range forecast suggests there will be no issues.

However the New Zealand Transport Agency has warned bike riders to be aware of the situation if they plan to use the low-lying cycleway alongside the north-western motorway 90 minutes either side of high tide in the affected week.

The New Zealand Transport Agency has warned motorists and cyclists of unusually high “king tides” that could swamp the Northwestern Motorway, one of Auckland’s major arterial routes.

The causeway between Waterview and the Rosebank interchange is thought to have sunk about half a metre since it was built in the 1950s. It will be raised by 1.5m as part of improvement work, which the agency aims to start by mid-2011. Fill removed from the Waterview tunnel could be used to build up the causeway.

After seeing Ken Ring add a comment last week I also meant to add a comment suggesting that we may also expect a large earthquake somewhere. Well, that’s what some people think, and I know scientists say there is no effect. Yet If the Moon can pull on tides… and Earth can effect Moon quakes… if something was about to give, why wouldn’t a perigee moon add to the tipping point? Anyway I was going to say that last week. Co-incidence? Maybe.

The moon is a little closer at present in its 18 year cyclical period at perigee causing this.(happens each month)

Hang on, climate scientists can now confidently look 10 days ahead whilst meteorologists admit they cannot? Surely meteorologists would like that ability too. I think Dr Salinger must be looking at astrological predictions that are already out there, which is indeed revolutionary!
Ken Ring

Cannot understand why NZTA don’t build a stopbank along the edge of the cycle way to stop any flooding due to King tides. Instead they want to build the whole motorway up 1.5m. Sounds over the top to me.

And what will winter have in store for both islands? and the length of it.. summer seems to have been cut short and wow winter lasts longer.

Feilding woke to fog this morning, temps were rather mild. Fog began to burn off shortly after 9.30 am and the day was beautiful

Many people may also been woken by a 3.6 earthquake shortly after 4.30 am 40 km deep I hear.. just a gentle rock may have put others back to sleep.