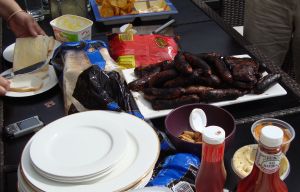 A weekend for BBQing is on the cards as a large and strong anticyclone in the Tasman Sea pushes over the country.

The high will bring dry, warm, and mostly sunny weather to most regions across the country – and will finally bring an end to the cold southerlies that have affected the eastern side of the North Island this week.

Afternoon heat may also create a few showers, especially near the ranges and the upper North Island. Northland, Waikato, Bay of Plenty and Auckland may be most exposed to those isolated afternoon showers – and some may be a little heavy.

But overall conditions will be dry – even with those odd showers about.

Southland may not be so lucky though – the trend of annoying fronts dragging their heels past the region means a few spits of rain are likely on Saturday – but it wont be cold. Highs in the late teens or low 20s.

In fact right across New Zealand it’s safe to say that 18 to 22 will be the common range of temperatures with perhaps Central Otago and inland Canterbury being the only regions that really buck the trend with highs in the late 20s possible.

If you’re going swimming – if you’re brave enough that is – be aware that a very deep low is currently tracking well east of New Zealand.

The dangerous thing about nasty lows like this is that sunny, hot, conditions may be prevailing at the beach but offshore, a long way from where you are, a low is churning the sea. Much like dropping a stone in a pond the ripple effect can go for a quite a long distance.

Check out this cool map that shows the swells moving in to the North Island this weekend, courtesy of weathermap.co.nz.