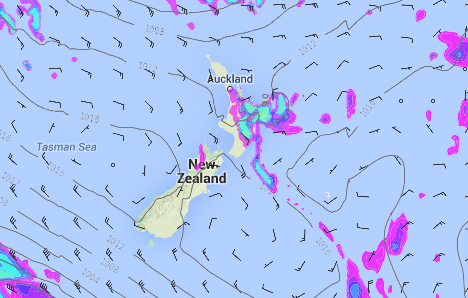 After the fireworks of yesterday’s very welcome North Island downpours, we’re heading into a quieter situation overall today, with more of the same in some regions, just a little less extreme.
It looks like the South Island is in for some action too.

About southwestern parts of the island, isolated showers are possible late in the afternoon and into evening – particularly inland areas from Taranaki down through to the Wairarapa.
Showers could be heavy for a time, but the risk looks to be less than yesterday.
Thunderstorms should keep at bay, but there is a low risk of one or two.

For the South Island, there’s a front moving onto the lower part of the country around midday, then moving northwards later on.
Any showers around North Otago in the afternoon could be heavy, with the chance of a thunderstorm, as well as a risk about South and Mid Canterbury in the evening as the change moves in – but the risk here is lower.
In the evening, southerly winds about coastal Canterbury (mainly Banks Peninsula southwards) could be gusty and strong.
Overnight, coastal winds north of Banks Peninsula look to grow gusty and strong.
This shouldn’t bother too many people, but it doesn’t look like the best place to be on a boat tonight!