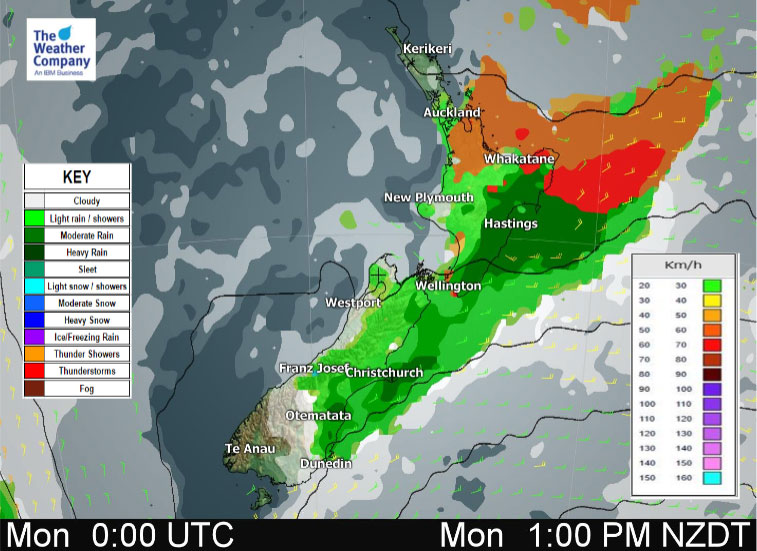 A large anticyclone centred to the southeast of New Zealand pushes an easterly quarter airflow over the country today.

There may be some morning sun today for the upper North Island excluding Bay Of Plenty which has some rain or showers. Isolated showers push in during the afternoon for Waikato through to Northland, some may be heavy with thunderstorms then easing at night. Mostly sunny in the southwest (Taranaki to Kapiti) then late afternoon / evening a few showers may push in from the east. Expect patchy rain or showers along the east coast for much of the day, there may be a few isolated areas of heavy rain drenching certain spots at times.

Expect a cloudy day for the east coast of the South Island with the odd shower or drizzle patch, there may be some rain right on the coastal fringe from Banks Peninsula up through to Marlborough. Nelson and down along the West Coast has a mix of sun and cloud, mainly dry in the morning then isolated showers possible late afternoon / evening. Showers about the ranges south of Greymouth may become heavy then clearing at night.

The place to be is Southland with mostly sunny conditions expected, cloud increases the further east you move towards the Catlins.”

Temperatures staying in the low twenties for Northland, Auckland, Waikato and Taranaki. Mid to high teen degree temperatures elsewhere across the country. The warmest spots in the South Island will be Nelson, Buller and Southland.