Monday – Warm conditions across most of NZ ahead of a front 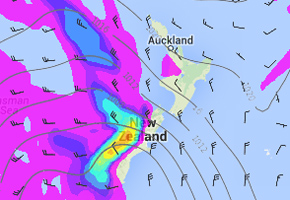 A northwesterly airflow lies over the country on Monday ahead of a front which moves onto the South Island in the afternoon then onto the North Island overnight.

Mostly cloudy for western parts of the North Island with northwesterlies gradually increasing, there may be the odd light shower at times otherwise mainly dry. Rain moves into Taranaki late afternoon or evening then into other western regions overnight. For the east coast expect mostly sunny weather and some high cloud increasing from afternoon, warm temperatures too up in the mid to high teens.

High’s will be in the mid teens for the upper North Island. Wellington is mostly cloudy with the odd shower moving in from afternoon, strong northwesterly winds and high’s around 12 to 13 degrees.

For the South Islands West Coast expect rain, easing to showers in the afternoon in the
south then further north in the evening as breezy northwesterlies change
westerly. Nelson sees increasing cloud from morning, odd shower afternoon then
evening rain which clears overnight. The east coast has thick high cloud with
gusty north to northwesterly winds, a west to southwest change moves through
Otago around midday then further north late afternoon and evening. This change
is expected to be mainly dry with only a few brief showers passing through for the
most part.

During the afternoon however a few showers move into coastal
Otago and during the evening there is a reasonable chance of a few spells of
rain about Marlborough.

West to southwest winds freshen about Southland
from morning bringing some rain then showers which clear by
evening.

Temperatures along the east coast of the South Island get into
the mid teens so a fairly good winters day before the westerly change moves
through. Highâ€™s around the low double figure mark for the West Coast, high
single figures for Southland.