Monday mainly settled, north and east of the North Island may get a few showers however 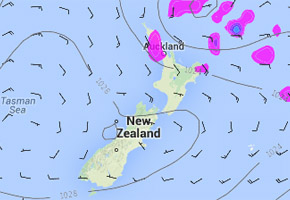 To start lets just say the South Island gets the goods tomorrow, sunny skies and light winds for all after what will likely be a frosty start for most. The only hiccup being Southland which may get a brief clearing shower in the morning then sunny spells
gradually break through cloud during the day, light westerlies.

For the North Island things get a little more variable, mostly sunny skies from
Wellington up through the Central North Island / Waikato and west of there with
southeasterly breezes. There may be some high cloud about however. For the east
coast from Wairarapa up to Gisborne skies are mostly cloudy with
southeasterlies, the Wairarapa may remain mainly dry apart from the risk of a
brief light shower passing through. The Hawkes Bay gets drizzle
patches developing in the morning and Gisborne northwards sees some
rain.

The Bay Of Plenty will likely stay dry but expect areas of high cloud, for the Coromandel and Auckland northwards skies will be mostly cloudy with southeasterlies. The Coromandel gets patchy showers with some rain likely
for the upper half of the Peninsula in the morning. Auckland sees the chance of
a patchy shower during the day, mainly north of the city and especially in the
morning. Shower activity about the Coromandel and northern Auckland clears away
in the evening.

Northland is dry about the upper half, the southern half of the region gets patchy showers which ease in the evening, southerlies tend more southeast during the afternoon.