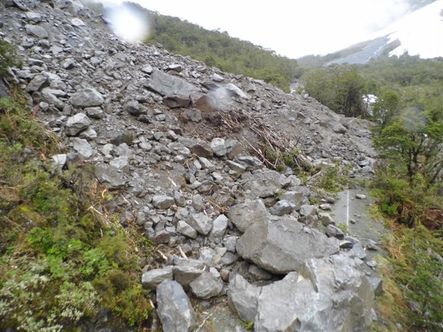 The Milford Road will likely remain completely closed down through tomorrow.  The New Zealand Transport Agency says that they hope to have one lane open by Wednesday.

The road was closed by the NZTA at 4pm on Friday because of wild weather and the landslip was discovered at 6am on Saturday by a contractor at a point known as “Red Slip”, estimated to be 2km on the Milford side of Falls Creek.

NZTA Southland area manager Peter Robinson said tourism operators were notified ahead of the closure and “most people were evacuated from Milford”. The road is the only land-based entry and exit to the popular tourist area.

Mr Robinson says whether or not the road can be opened by Wednesday depends on how easy it is to break down the big boulders which have dropped 500 to 900 metres down the slope.

He adds that the road beneath the rocks – some as large as small cars and weighing up to 200 tonnes – had been punctured, and it was likely a gravel fill would be placed into the gap to enable one lane to open.

On Sunday, Mr Robinson said geotechnical experts had completed their assessment of the site and were looking at creating a “bund” above the slip to contain any loose material.

He could not say whether the bund would be a permanent safety feature in the area.

The duration of the full-road and subsequent one-lane closure was uncertain, and would depend on how quickly contractors could move the rocks.