Milder than normal in NZ this week, a cooler change this Sun/Mon for some 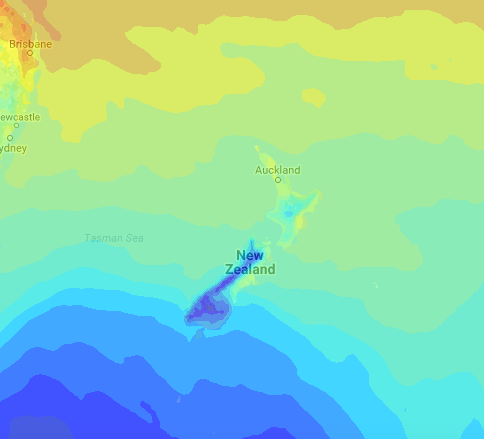 The warmer than usual weather pattern around New Zealand is in no hurry to leave, being caused today and tomorrow by sub-tropical northerlies then will continue later in the week as mild westerlies from Australia.

However by Sunday a partial southerly will press into the lower part of New Zeland briefly returning temperatures to normal – but it looks short lived.

In the South Island Dunedin City has double digit highs until Sunday when a brief showery sou’wester moves through. The high is 9 degrees on Sunday.

Further inland and Queenstown, for example, has highs in the late single digits all this week until Sunday when it drops to 7 degrees with an overnight low of -2. Every other overnight low until then in Queenstown is hovering above freezing at the 2 or 3 degree mark.

Christchurch will go from highs in the mid to late teens this week to a high of just 11 next Monday, then next week climbs back into the low teens with frosts looking fairly unlikely at this stage.

Some snow is likely on the ski fields of the South Island this Sunday.

In the North Island and a warm week will finally give way to a slightly colder showery southerly early next week – but it looks very short lived.

Wellington, for example, has highs around 13 and 14 degrees this week, dropping to a high of 11 next Monday and 12 next Tuesday.

But just a little further north and most people won’t even notice this brief southerly. Hawke’s Bay – which this week will be climbing into the late teens and even the 20 degree mark has a daytime high of just 14 degrees next Monday. If winds tilt even slightly further west by then, then this high may climb above 14.

As for Auckland and the upper North Island – you’re stuck in this mainly warmer than average pattern with no southerlies of significance in the 10 day forecast. The highs in Auckland look stuck in the 16 to 18 degree range for the next week or so with the coldest weather (at night) dropping only to 8 degrees for a couple of nights next week. Hardly icy!

The warmer than usual trend for the first half of August will continue for most places until the second half of the month with plenty of westerly driven weather coming our way.