Mild temperatures return to the east 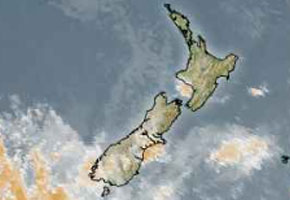 Classic spring weather, thunderstorms last night in Christchurch then a cool night and now temperatures ramping up in the east of both islands under a northwesterly airflow, it is currently between 17 and 19 degrees from Dunedin right up to Gisborne.

Although perhaps classic is not a word to describe the storms last night in Christchurch as it was quite out of the ordinary. Would you believe storms like that will generally happen every year or two somewhere in Canterbury, just not everywhere gets them at the same time due to their isolated nature. Despite the storms yesterday some parts of Canterbury were totally dry and didn’t get any storms, it can be the luck of the draw and Christchurch hit the bulls eye last night.

It is cloudy with showers on the West Coast of the South Island as a result of the northwesterly airflow today, cloudy areas for the west of the North Island and mostly dry although there is one or two rouge showers out there. The windiest centre is Wanganui with westerlies hitting 43km/h, later this afternoon and evening northwesterlies are expected to increase over the South Island.