Mild in the east for the weekend 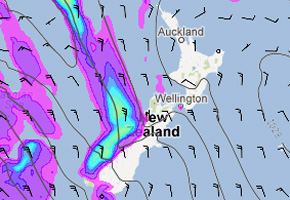 The first of the warm spring like northwesterlies kicks in this weekend for the east coasts of both islands. Temperatures are likely to be in the high teens although there will be high cloud at times particularly in the South Island then for the North Island later on Saturday and for most of Sunday.

Other areas of the North Island are likely to get mild temperatures tomorrow also. The flip side to the warm temperatures out east means rain in the west and heavy falls are possible on the West Coast of the South Island, the rain will develop tomorrow morning in South Westland moving up the coast during the weekend. 100 to 150mm is possible south of the Glaciers on Saturday and then north of the Glaciers during Sunday.

Our next southwesterly front is due early next week on Monday for the South Island then overnight Monday into Tuesday for the North Island, this will reset the clock so to speak and we’ll have a period of cooler weather. An anticyclone is then due mid to late next week coming in behind the southwesterly airflow from the Tasman Sea.