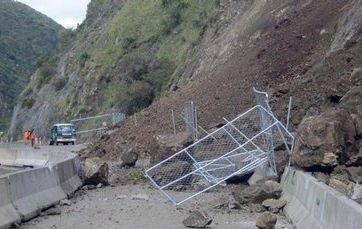 The New Zealand Transport Agency (NZTA) is taking control of the Saddle Rd and Pahiatua Track as the closure of the Manawatu Gorge looks set to continue for a further two months.

The agency’s road crews have assumed responsibility for the maintenance of the detour routes. The detours had previously been maintained by council contractors based on a funding agreement with the agency.

Mr McGonigal said by temporarily taking over the alternative routes, road crews would help to ensure the routes remained safe.

The decision follows a meeting last Friday between the NZTA and the mayors and chief executives of the Tararua and Manawatu local bodies. Local businesses said the longer drive times were hitting them in the pocket as repairs dragged into a seventh week.

Dannevirke’s Derek Boyden, of Boyden Freight, said travelling over the Saddle Rd was “a major pain”.

“It’s starting to become a bit of a joke really,” Mr Boyden said.

An estimated extra $20,000 on fuel had been spent due to longer drive times.

“We appreciate that the alternative routes have taken a lot of punishment, and given the length of the closure it’s appropriate that we fully assume the costs and organisation of the upkeep of these roads,” Mr McGonigal said.

While the scale of the slip looked set to surpass the slips of 2004, the gorge was expected to remain viable long-term, he said.

“Closures of this extent only happen around once in a decade, but when they do happen they cause real disruption.”

Ongoing slips had occurred at the location of a much bigger ancient landslide. “The area is made up of silty, sandy gravel with large boulders mixed with areas of greywacke rock, resulting in an unstable hillside that needs to shed more material before it stabilises. We’re up against the forces of nature here, and to some extent we have to wear it on the chin, and that’s not easy to accept when you’ve got an important highway that’s shut.”

The detour routes take on average 15-20 minutes longer than SH3 through the gorge.

Time for our Transport agency to do what is normal in Switerland and construct debris deflecting roof over most of the Gorge highway. Easy to divert some funds from Auckland’s “Holiday Highway” which is designed to relieve congestionwhich occurs on only 11 holiday days a year.