Mainly dry again this week but a few showers appearing 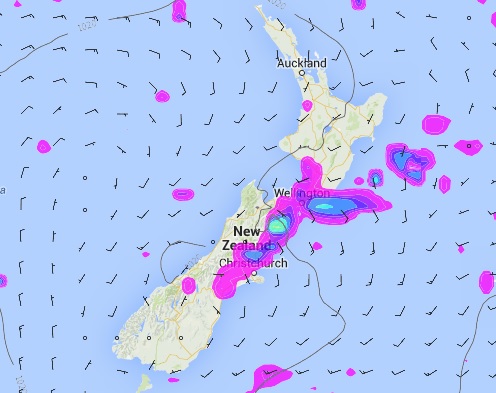 This coming week will still be mainly dry for most but there is a few showers starting to appear for certain regions, the West Coast of the South Island is the winner rain wise so not where it is really needed but lets have a peek at how things are looking to unfold.

For the North Island on Monday a weak front approaches the west in the morning bringing some cloud and the chance of a shower or two, clearing up in the afternoon with sunny areas increasing. Winds from the west or southwest. The Bay of Plenty and east coast are looking mainly sunny, morning cloud breaks to sunny areas for Wellington.

The South Islands West Coast has you guessed it, rain or showers spreading northwards during the day. The east coast is mainly sunny with northwesterly winds, about Southland and Otago sunny areas at first give way to heavy showers and possible thunderstorms in the afternoon. Showers may spread into coastal South and Mid Canterbury later in the evening / overnight on a southerly change.

Tuesday has a mix of sunny areas and some cloud across much of the North Island with west to southwest winds, a few showers may get going in the afternoon for many North Island regions on a weak frontal zone but they do look very isolated in nature meaning theyâ€™ll be quite hit and miss. The most likely regions to get showers after midday will be the Waikato and Bay Of Plenty (especially inland) across to the east coast late afternoon / evening.

The east coast of the South Island has sunny areas and some cloud, light winds in the morning then afternoon sea breezes for most. Isolated showers may get going late afternoon / evening, first about inland Southland / Otago then perhaps Canterbury / Marlborough later in the day. Any showers for Canterbury or
Marlborough will be mainly inland then the coast could see a few showers overnight.

On Wednesday most see settled conditions, about Canterbury through to the Wairarapa in the east there may be a few morning showers about, easing into the afternoon and gradually clearing. A little hit and miss these showers so not a sure thing but something to perhaps be hopefull for. Either way they will more then likely only keep drought like conditions at bay for a little longer versus really rectifying any situation.

Friday sees a northwesterly airflow building over the South Island and lower North Island, the upper North Island has a ridge and settled conditions. The weather is mostly sunny and elsewhere also, winds will definitely be on the up however with cloud and showers moving into the South Islandâ€™s West Coast during the afternoon.