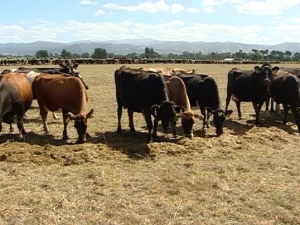 Farmers in the Mainland are coming to the aid of their drought-stricken counterparts in the north, sending them excess hay to feed livestock.

Canterbury farmers have had a hot, dry summer too – but this has provided perfect harvesting conditions for hay, which is in short supply in the North Island.

Northland, South Auckland, Waikato, Bay of Plenty, Coromandel and Hawke’s Bay are all officially in drought, while Manawatu and Rangitikei are also asking the Government to declare their regions drought zones.

Federated Farmers says trucks have already begun driving the feed north and the association is also investigating the possibility of using trains and ships if demand is high enough.
Extreme drought conditions are also forcing North Island farmers to process or relocate large amounts of their stock, as the sun continues to dry out feed.
Shipping companies are feeling the impact of the shift, with major players recording massive increases in stock transport.
A spokesperson for Interislander says the company saw a 47 percent jump in sheep being freighted last month, compared with February last year – moving a total of 75,000 sheep.

Straight Freight, which handles 40 percent of freight across the two islands, says it has also seen a “noticeable increase” in stock coming through.
Most of the animals have been shifted to Canterbury, Otago and Southland but these farmers are experiencing issues of their own in the ongoing hot weather.
Jeanette Maxwell, a farmer in the mid-Canterbury foothills, says her farm has taken on some of the new stock despite their own drought.
“It stays green up in the foothills, but the grass stays incredibly short,” she says.
Ms Maxwell thought the area could handle the increased pressure, but said the numbers are well above the ordinary.
“It’s traditional for breeding stock to move back and forth but not for lambs, well large volumes of lambs, to be moving.”
She expects most of the shifted stock to be lambs, who have to eat new grass and can’t get by on straw. They are likely to be processed in Canterbury, she says, saving further freight cost.

I just thought I’d point out that no one in the North Island actually calls the South Island “the Mainland” (except for South Islanders who have immigrated).

You’re right and remember the Mainland Touch on TV in the 70s and 80s?? Great show 🙂

Thanks Peter and altered!