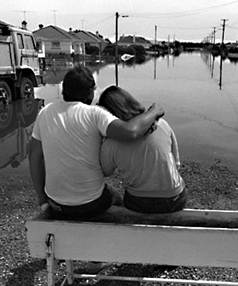 In late January 1984, devastating floods struck communities in Invercargill and nearby Southland. The cause was a combination of north-westerly rain in the mountain headwaters of Southland rivers, and a slow-moving southerly front that dumped heavy rain over the lowlands.
Steady rain on 26 January – a record one-day total of 84.8 millimetres – had by 9 p.m. caused extensive surface flooding in the streets of Invercargill, Riverton, â‰ˆÃ¥tautau and Bluff. Local waterways soon overflowed, and by 4 a.m. a state of emergency was declared. By morning many streets, houses, shops and factories were under water, and local streams sent torrents of water through Invercargill. Levels rose further still as high tide prevented flood water from draining into the Invercargill estuary. By mid-morning of 27 January, the state of emergency included all of Southland. The rain stopped by noon, but the rivers continued to rise.
Army and air force personnel were dispatched south to aid rescue efforts. An estimated 5,000 people abandoned their homes, and helicopters lifted dozens of people from rooftops. Roads and railway lines were submerged, cutting off the region from the rest of New Zealand. Water up to 3 metres deep flooded Invercargill airport, partly submerging 10 light aeroplanes.
It would be a week before most people could return to their homes, and several weeks before the state of emergency was lifted. When the flood receded, extensive damage was revealed: at least 1,200 homes were uninhabitable, and residents eventually discarded more than 5,000 tonnes of ruined personal possessions. Hundreds of flooded cars had been abandoned. No human lives were lost, but livestock losses were heavy – more than 12,000 sheep, 330 pigs, 100 cattle and 75 deer were drowned. A relief appeal raised more than $3 million, and tens of millions of dollars were paid out in insurance claims.

Actually, the 24-hour fall at Invercargill was 134mm, far in excess of any previous daily total, though the monthly total of 278mm was a litlle short of the record 299mm in Feb 1940.