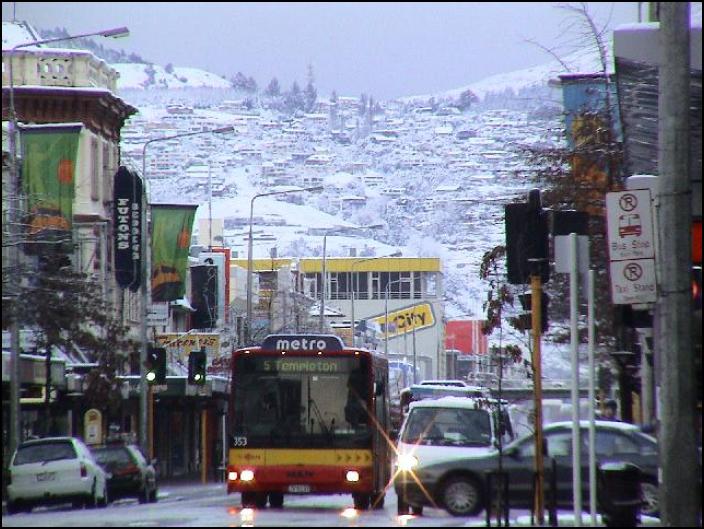 Cantabrians awoke to find their region blanketed in snow. ‘The Big Snow’, as the 1992 storm came to be known, was the region’s heaviest for 30 years. Schoolchildren celebrated when they learnt the storm meant their holidays had begun a day early. But it couldn’t have struck at a worse time for farmers – right in the middle of lambing season.

From midday on 27 August weather forecasts alerted residents to the possibility of snow. It began to fall that evening. As forecast, it snowed literally down to sea level. New Brighton beach was barely recognisable.
By mid-morning on the 28th power was out throughout much of the region. Most of Christchurch city had power restored by the afternoon but it took several days for line gangs to reach some rural areas. Residents able to tune in on battery-operated radios were advised not to go to work unless it was absolutely necessary, and then only if they had a four-wheel drive or chains. Many inland roads were closed, as were schools, courts and other services, including Christchurch airport. Local hospitals stayed open with assistance from the army and Red Cross, which transported essential staff. Some dairies and bars also opened, servicing the brave few who ventured out.
Sugarloaf, the site of the city’s radio and television transmitter, was rendered inaccessible and soon ran out of fuel for its emergency generator. It was two days before bulldozers cut a path big enough to allow a tanker to bring in fresh supplies of fuel. Fortunately local television station CTV was able to stay on air and keep residents informed.
While life, and television viewing, was disrupted in Christchurch city, it was the rural community that was hardest hit. Not only was it the middle of the lambing season, but many farmers were still recovering from the effects of a snowstorm in July. Farmers faced losing newborn lambs, ewes and older lambs weakened by the earlier storm, and sheep freshly shorn for lambing. They were advised by the Ministry of Agriculture and Forestry to focus on those they could save. Other regions pitched in with supplies of hay and the government agreed to pay grants to cover the road-user charges incurred in collecting and distributing the feed. It was later reported that more than one million sheep had died, with the cost to farmers an estimated $40 million ($58 million in 2009 terms).