The crown forecaster has this morning stepped up their prediction of thunderstorms for some parts of the upper North Island later this afternoon or evening.

They say a shallow trough lies from from Bay of Plenty to southern Coromandel Peninsula,Taupo and eastern Waikato. “The combination of humid air at low levels and cooling aloft means there is a moderate to high risk of thunderstorms for these areas during the afternoon and evening, and possibly into the night nearer the coast” the crown forecaster says.

“These thunderstorms could produce localised heavy rain up to 25mm per hour as well as hail up to 15mm in diameter”.

However in Bay of Plenty and Taupo, where any thunderstorms are likely to be very slow moving, there is a moderate risk that a few could be severe with downpours 25 to 40mm per hour.

They says there is a lower risk of thunderstorms in the immediate surrounding areas, as indicated on the chart below. 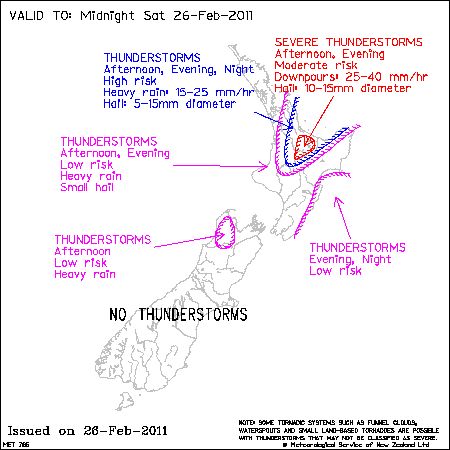 Does that mean thunderstorms for Northland?

No Gina, only Central Plateau/inland BOP region at this stage.