Large highs “critical” to saving the rest of summer 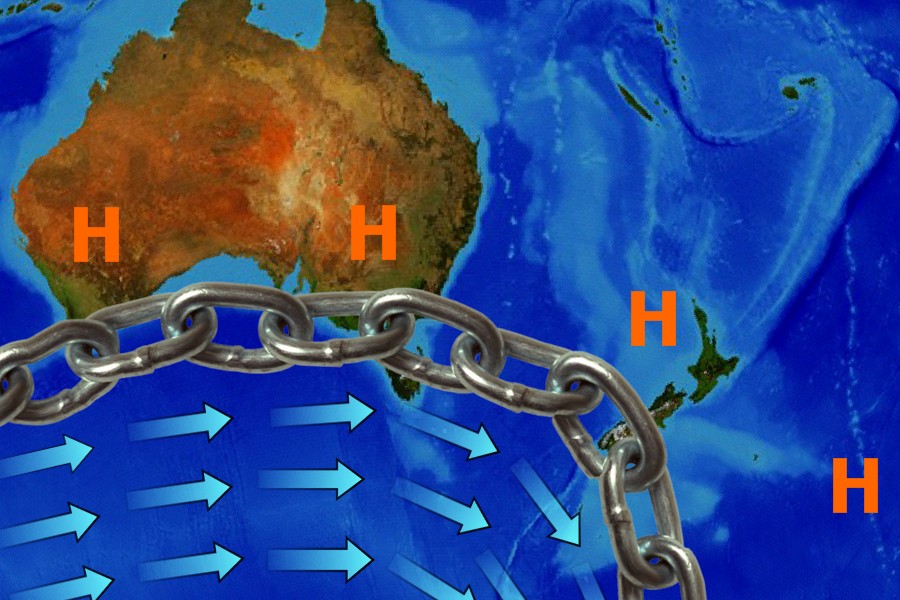 Whether summer continues to be a roller coaster of hot, cold, wet and dry is almost entirely in the hands of high air pressure systems reports WeatherWatch.co.nz.

Much of the nation has been swamped with rain bearing fronts since the very start of December, with only dry weather holding firming in Southland and Otago and the West Coast, but lately that has changed.

The highs that dominated the south are spreading further across the country – making the south more vulnerable to rain.

Meanwhile the North Island has finally had a breather from the worst of the rain events with two strong highs in recent weeks finally bringing some relief to holidaymakers.

Head weather analyst Philip Duncan says a glance at the rain prediction maps shows the only thing sparing us from rain are the highs.  “Highs, also known as anticyclones, act like giant protective bubbles, they can stop tropical cyclones, aggressive rain bands and days of relentless showers and winds – and this summer they are critical to bringing us settled weather”.

Mr Duncan says there are significant rain features trying to attack us from every angle.  “There are cyclones hitting northern Australia, relentless rain and showers now hitting Queensland, and now Nadi in Fiji is today effectively cut off due to deadly flooding.  Meanwhile large storms continue to push up near the South Island from the Southern Ocean.  The only thing between us and all of that are our highs”.

WeatherWatch.co.nz says not every summer is like this, and that while highs do bring settled weather quite often the weather around highs in summer can also be fairly settled.

But not this summer.

“As we head towards the end of January and the start of February the highs are definitely strong but as each high departs, and before the next one can move in, the country is very vulnerable to heavy rain from the sub-tropics or a cold blast from the south”.

WeatherWatch.co.nz says February is looking very active rain-wise across the entire south west Pacific and much of coastal Australia so the placement of the highs will be critical to protecting us from the rain.

Im heading to Queensland on Saturday, been watching the gold coast weather, and was wondering if you can give any predictions as to what might happen next week, does it look like the rain/showers will continue in the same pattern?

Also will be in Sydney, hopefully it will be more settled down there!

The best aussie forecasts are found at http://www.Weatherzone.com.au or weather.com

Our maps are also interactive and you can see rain, wind and temps for anywhere in Australia (or the world) by clicking here: http://www.weatherwatch.co.nz/maps

We don’t expect any great changes for Queensland – other han a higher risk of heavier rain over the coming weeks.

Cheers – and have a good trip

We need some long lasting anticyclonic northerly flows in Auckland,this also means rain in the south and west of the south island,they can have it though this currently being good drying weather the SW so strong in the afternoons the pine needles get over everything and the cars dirty,roof is now covered and all else.

nothing wrong with a bit of rain, good for the grass. all the farmers (north canterbury) reckon this is one of the best summers in decades.

You’re definitely right there – we provide forecasts to Fonterra and they have, overall, been very happy with weather conditions over the past two months.  Good to finally see rain clouds moving back in to Southland  and Otago too – and hopefully some more for Canterbury over the next week.