Labour Day could be pretty wet 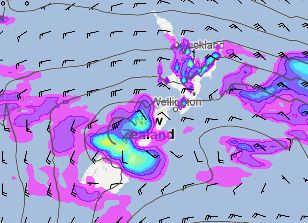 The unsettled weather seen across the North Island today, will stick around for tomorrow.  At least for the early part of the day.

On the South Island, settled weather is expected to return overnight and stick around throughout Monday.

For the North Island, look for rain about the upper two-thirds of the island during the overnight hours.  Around sunrise, the rain chances will go up for the lower NI, including Wellington and the Kapiti Coast.  That means that for the first part of tomorrow, just about the entire North Island will have at least a chance for precipitation.  Hawkes Bay will run the lowest risk for seeing any rain.

By evening, only the lower part of the island will see any chance for rain.  So New Plymouth, Wanganui, the Kapiti Coast and Auckland could all still see a few showers.

On the South Island, much of the upper half of the island will start the day with some form of precipitation.  Rain for the lower elevations.  Snow for the higher elevations.  The most widespread precipitation will be found about Nelson, the West Coast and Canterbury.  The deep south will also likely see showers tomorrow morning.  These areas are likely to see precipitation continue into the afternoon hours as well.

Precipitation will ease as we get into tomorrow evening.