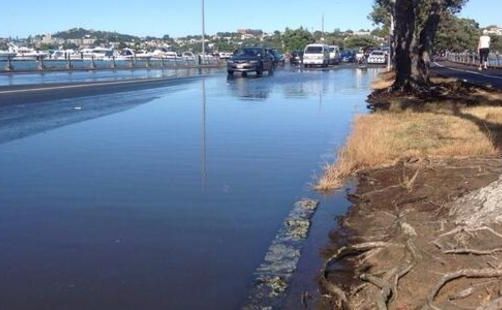 Parts of Auckland’s waterfront were submerged during king tides this morning.

Tamaki Drive was partially submerged just after 9am, and the North Western motorway’s cycle was also breached by rising swells.

In the Hawkes Bay, residents were on high alert for king tides accompanied by 40kmh winds.

The Junior Surf Carnival at Ocean Beach was cancelled after four metre waves were predicted.

Civil Defence emergency management team leader Trevor Mitchell said warnings for the seaside town of Haumoana would remain in place for the rest of the day.

He said warnings were only put out when tidal threats were ‘very very credible’.

Mitchell hoped strong southerly winds would blow the swell away from the land from 8pm Saturday night until 8am on Sunday morning..”We advised everybody about the tides. We’ve had signs warning of sea swells put up at entrances to coastal communities.”

The king tide affected surf beaches all around the country.

Wellington’s Paekakariki Surf Club Championships moved its event schedule as the tide was expected to swamp the beach, where 300 surf lifesavers were to attend today.