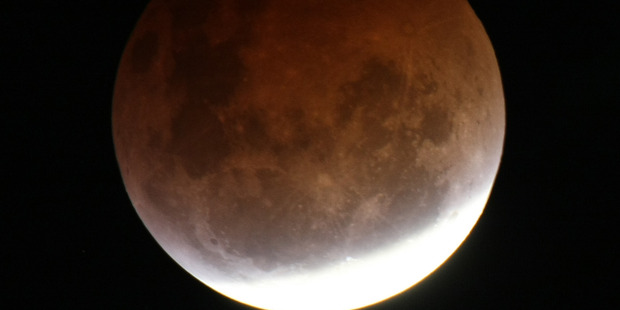 Get your binoculars and telescopes at the ready – there’s a total lunar eclipse coming to a night sky near you.

Tonight’s total eclipse will turn the full moon a bronzy-red colour for almost an hour and Auckland’s Stardome Observatory astronomy educator David Britten says the event is not to be missed.

“It’s special because it’s the last total eclipse that we can see in New Zealand until 2018. So it really is something to get out and see if we can. Hopefully the clouds hold off.”

The best place to see the earth’s shadow covering the moon at midnight is out in the country where there aren’t as many lights, but Mr Britten said it can still be viewed well from cities.

“At the middle of eclipse you’re not going to see it quite as spectacularly as out in the countryside.”

Tips for viewing the eclipse included going out earlier to get your eyes used to the dark, finding an unobstructed spot before the eclipse begins and using binoculars or a telescope.

“You need to get used to the dark and get away from lights, especially during the middle of the eclipse when it’s quite dim.”

Mr Britten said despite the middle of the eclipse scheduled to happen just before midnight, he expected a lot of star-gazers to stay up for it.

The eclipse gets its reddish-orange colour from sunlight sneaking around the edge of the earth’s atmosphere, reaching the moon and reflecting back to earth.

Next year there will be two lunar eclipses over New Zealand, in April and September, though neither will be total eclipses and in September it will occur during the day and won’t be able to be viewed.

“After that there’s no total eclipses of the moon to be seen from New Zealand until January 31, 2018.”

The Stardome Observatory will hold 20-minute informative shows about lunar eclipses from 8.30pm for a $2 donation and courtyard telescopes will be available until the end of the event at 3am.

What is a lunar eclipse?

Nicknamed the “blood moon”, a lunar eclipse occurs when the moon passes directly behind the Earth into its shadow, or umbra. It occurs only when the sun, Earth and moon are closely aligned with the Earth in the middle, and only during a full moon. A lunar eclipse occurs as Earth’s shadow from the sun stretches out more than 1 million km and the moon is less than 400,000km away.

What types of lunar eclipses are there?

Why is the moon red?

The moon does not go completely dark as it passes through the umbra because of the refraction of sunlight by Earth’s atmosphere. The red colour arises as sunlight reaching the moon must pass through the atmosphere where it’s scattered, as with sunsets and sunrises.

What is the difference between a lunar eclipse and a solar eclipse?

A solar eclipse occurs when the moon casts its shadow on the Earth as the moon passes between the sun and Earth. It can be seen from only a small area of the world, whereas a lunar eclipse can be seen anywhere on the night side of the earth.

How often does a lunar eclipse happen?

A total lunar eclipse is rare – New Zealand’s next one will be in January 2018.

Good article but without the essentail information: When does it start and when does it end (times please!)