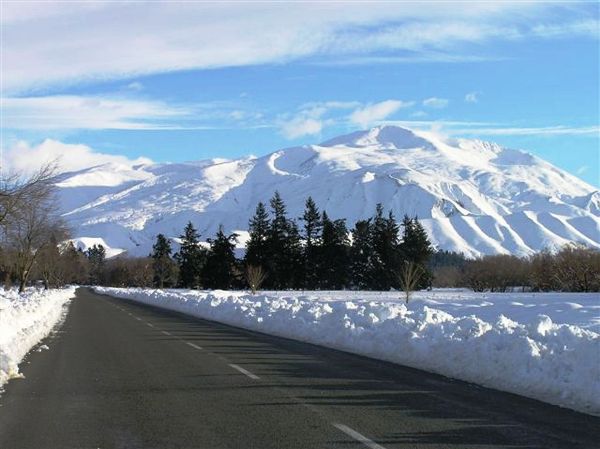 Tomorrow sees the beginning of a wintry blast moving over the South Island but it’s not expected to be anywhere near the degree of the last significant snowy June event.
It was in 2006 when heavy snowfalls caused major issues in inland areas of Canterbury and also some coastal areas of the province.

The snow caught many forecasters by surprise and it was the heaviest falls for over 50 years in some places and on record in others.

NIWA wrote a report on the whole occurrence six years ago…

Snow in the Canterbury plains and foothills south of the Rakaia was as deep as the July 1945 snow storm which produced very heavy snowfall down to sea level. In some places, last month’s snow was even deeper.

NIWA estimated snow depths across the entire region and compared these to published information on six previous extensive snow storms in Canterbury.

North of the Rakaia River, snow depths were significant but not unprecedented

Coastal plains: In the coastal plains areas (north of the Rakaia) the snow was much deeper than the 1992, 1973, or 1967 snow storms, except in Christchurch where the 1992 snow storm was much more severe.

South of the Rakaia River, snow depths were extreme in places

Canterbury plains: This area experienced exceptional snow depths. The 12 June snow storm produced greater snow depths than the 1973 and 1967 snow storms. Snow depths throughout this area were similar to the 1945 snow storm and in some areas much deeper. Ashburton had the greatest maximum snow depth on record.

Inland areas: The area around Fairlie and Burkes Pass had similar snow depths to the 1973 storm, while areas further west into the McKenzie Basin had significantly less snow than most previous notable snow storms with only 50cm being recorded at the Hermitage, as opposed to over 100cm in 2002, 1973, and 1967.

An article discussing major snow storms in the South Island. First comments: moaning about how Auckland got all the press coverage for a power outage.
You South Islanders really are an insecure bunch!

Can remember that day well,12/6.where the auckland power blackout eclipsed much of the news of the snow.

The 2006 event was very well covered by TV1. So the above poster must have been watching another TV station.

um no, TV1 led with aucklands powercut and what caused it, the D link explination came before the biggest snowfall on record in some places. About what you would expect for an Auckland focused news broadcast.

I remember there was more news about the Auckland blackout than there was about the snow. Yet there were people I know in South Canterbury (fortunately we only lost power for a few hours) who had no power for 3 weeks!