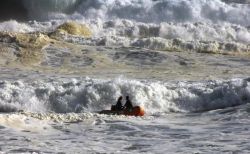 July was unusually warm, but a bitterly-cold polar blast towards the end of the month brought the mean temperatures back down to average, National Institute of Water and Atmospheric Research (Niwa) says.

Niwa national climate centre’s summary of July’s weather said while the monthly mean temperature was near average in many regions, temperatures on some days were anything but typical.

It had started out unusually warm in eastern areas of both islands, but a polar blast during 24-26 July delivered a bitterly cold air mass.

This cold blast brought snow to many areas which usually never get dusted, including Wellington and Motueka, northwest of Nelson.

It also created the coldest day on record for July in Manapouri, with -10.2 degrees Celsius.

The average temperature in July was 8degC – 0.1deg above average.

It was an extremely windy and stormy month overall, with the westerly wind index for Christchurch southwards the second-strongest for July since records began in 1941.

It was a very wet month for the western areas of both islands, with rainfall totals well above normal across the south and west of the South Island, and Wanganui to Waiouru.

Wellington, Bay of Plenty and Northland had below normal rainfall.

Sunshine totals were well above normal for the South Island’s east coast, as well as coastal Wairarapa.