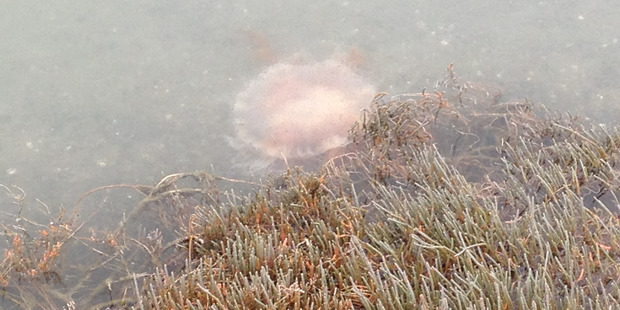 Those looking to cool off at a popular Napier swimming spot are having to share the water with swarms of jellyfish.

Reports of jellyfish sightings at Pandora Pond have increased since summer began, but this has not stopped thousands from enjoying a day swimming, kayaking, or using the inflatable playground.

While National Aquarium of New Zealand exhibits co-ordinator Regan Beckett guessed there could be hundreds – or even thousands – of jellyfish swimming around Pandora Pond, he said there was no cause for worry.

It was not uncommon for jellyfish to be spotted closer to shore during the warmer months, Mr Beckett said.

The worst people could expect from them was a “nasty whack”, although the severity would depend on the person.

“People just have to be aware that they are there, and take precautions,” such as trying to avoid swimming too close to the jellyfish.

One person who did have a painful brush with the creatures was Napier man Richard Farquhar, who was stung by a jellyfish last month.

However he admitted it was “pretty tame”.

“Felt like someone was poking you with lots of little needles for a couple of hours but felt the sting straight away on the top lip when it happened,” he said.

“Gave you more of a fright than anything and was actually having a pretty good swim when it happened.”

Pandora Pond visitors spoken to by Hawke’s Bay Today said they were not worried about the jellyfish.

For some children, such as those who enjoyed an afternoon there last week with Napier resident Amy Barclay, washed up jellyfish even offered a chance to safely examine the creature up close.

Ms Barclay, a frequent visitor to the pond, said she did not mind the sea creatures but hoped they did not sting people.

A Pandora Pond senior lifeguard said although people mentioned the jellyfish to lifeguards, and children often pointed them out, she was not aware of anyone being injured by them.