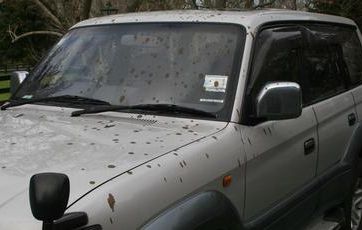 A man is causing a stink after he says his wife, children, car and home were hit by flying human waste.

Andrew Burns believes it must have come from an aircraft flying over his home in Karaka.

He has yet to get to the bottom of the problem and has become frustrated with his fight for information from the Civil Aviation Authority and Airways NZ.

The first incident involved a long battle for information which Mr Burns eventually gave up on after being “stonewalled” by the organisations.

The CAA believes that a brown substance that sprayed over his driveway, himself and others on the property including his daughter, then aged 4, in November 2007 was duck excrement.

Mr Burns saw a plane flying over at the time but struggled to get information on flight paths to find out what airline may have been responsible.

So when the second incident occurred on September 4 last year, he was prepared for the reaction.

His wife, Rachel Burns, was playing outside with their children, aged 6 and 4, when they were showered with the substance which they say smelled like human faeces – and ESR analysis showed that it was.

Mrs Burns said she was stunned when she felt the substance hit her like rain but demanded her husband take photos as proof.

“I was just in shock. I screamed in disbelief, I couldn’t believe what had just happened because it’s the second time it’s happened … it stunk.”

A health inspector took samples from the substance which covered about 20sq m including a Toyota Landcruiser and the house roof, where the family’s water supply is.

The CAA maintains the substance is duck or bird excrement.

Mr Burns remains disgusted at the incident and by the lack of action on behalf of the CAA.

The Burns’ feel as if they have been fobbed off by the CAA and Airways NZ and are worried that more excrement will be dropped.

CAA spokeswoman Emma Peel said that as there was no aircraft flying over Mr Burns’ house at the time he gave – or five minutes before or after – the matter was an “avian” one, not an aviation one.

She questioned the credibility of the ESR results and said the only thing that would show the substance had come from an aircraft would be a test for the chemicals usually present in aircraft toilets.

“If the sample is found to contain that, then we might have an issue that needs further investigation.”

An Airways NZ spokeswoman said the company had not provided information to Mr Burns despite frequent correspondence since September because he only requested the information he needed under the Official Information Act on Thursday.

Mr Burns said he used the Official Information Act during the first complaint, but the CAA took months to respond and when it did, it said the authority no longer had the information.

The CAA received 30 similar complaints in 2003, mostly in the Waikato area, none of which was attributed to aircraft and said it had had only one or two since.