Is it an asteroid? A UFO? Check out this spectacular display in Auckland’s skies 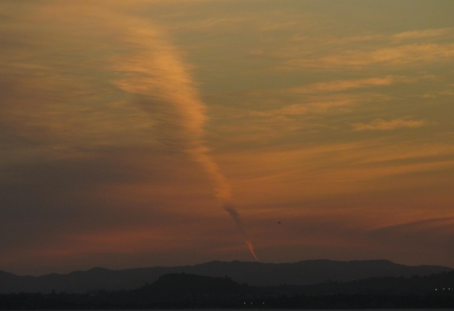 Aucklander Joan Kirk, looking out over a stunning sunset last night, saw something unfamiliar in the burning orange sky.

Intrigued, Ms Kirk – who lives in Rocky Bay on Waiheke Island – emailed the Herald and asked: “What was that?”

Alongside the images she took of the curiosity, she explained what she saw: “It started quite high and then slowly made its way from approx[imately] above Mt Wellington down toward the Waitakere Ranges.”

But Ms Kirk need not worry about a visitor from outer space, or an asteroid crashing to Earth – experts say it is simply a jet vapour trail and a “spectacular” looking one at that.

WeatherWatch head analyst Philip Duncan said the images show a flight path over Auckland to or from possibly Sydney, Melbourne or Brisbane.

” … may have been from a flight leaving Auckland, or one that simply flew over.

“It’s a bit of an optical illusion but it’s really flying along in one direction towards Australia at the same height – but the further it moves away from us the lower into the horizon it goes. The setting sun makes it look more spectacular.”

Mr Duncan said this kind of thing is often seen over Auckland, Wellington and Dunedin at sunset.

“Many flights pass over New Zealand and don’t land here, but even a flight departing Auckland can fairly quickly reach the point of making clouds like this – perhaps within 20 minutes of departing west to Australia.”

He said they were “great photos”, but just a normal jet vapour trail.

“The clouds nearer to us fan out a lot more because that cloud is older than the one closer to the plane, further in the distance.

“So the clouds have this sort of backwards V shape … the longer the vapour trail has been sitting in the sky the more the winds aloft spread it out – closer to the plane it’s far more narrow as it’s created by each engine on the plane. The more engines the more trails or cloud.”

“It’s a vapour trail in the setting sun. I saw them myself the other night, it was beautiful. It was near sunset, they’re low in the horizon, and they are the vapour trails from departing aircraft from Auckland.

“It’s just because of the low setting sun – the back lighting through the vapour trails as the aircraft are heading across the Tasman.”

He said they are “quite spectacular” but nothing unusual.

As numerous rainwater tests from around the globe and here in New Zealand have shown, heavy metals are being disseminated into the atmosphere we breathe, among a host of other harmful substances.

In addition, former US government employee and respected researcher, Clifford Carnicom has been investigating and reporting on aspects of these aerosols for over a decade, including what they are doing to the environment and our health.   Alarmingly, he has evidence to show that aerosol trails are achieving far more than modifying the atmosphere.  His research has shown that the aerosols also contain bio-engineered filaments that are infecting the global population with exotic, cross domain bacteria which do not exist in nature.

Each night about the same time a plane leaves Auckland. 2 nights ago left a strong trail in the sunset.