Is Auckland getting significantly drier each year? 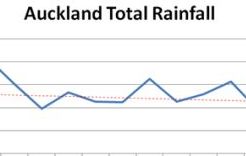 I am a retired electrical engineer ex New Zealand Steel and have always had interests in many of the sciences, including weather and climate.

I do realise that my data is very narrow and focused on a small area and that can be very misleading. I was really interested in whether anyone has a similar focus on the Ak region as a whole.

Is anyone getting concerned [I am in my 70s so can afford to be excited rather than concerned!] about the Auckland rainfall in recent times?

This is the Herald data so it represents one location, but I assume that over the whole Auckland region the general trend will be similar. The 1991 data is actually the average up to 1991.

Back in 1992 a ‘wise man’ on TV told us that the first sign of global warming would be increased rainfall – not doubt for the world as a whole.

But I thought I would monitor the local rainfall to see what happens. The theory was that rising temperatures would increase evaporation and since the amount of water held in the atmosphere is basically constant there would be consequently heavier rainfalls. Perhaps we only have global warming in May and October.

I’m afraid Auckland shows no change in average rainfall since the Albert Park rain gauge was set up in 1863, once you take into account the urban heat island effect, which is that more concrete, reflective glass and vehiucle fumes etc create a warmer location which tends to provide a false idea of warming over decades and also prevents clouds from dropping their rain over that spot. There is therefore no way of telling, just from past data, whether any city (that is always growing) is warming. In 1863 Auckland total rainfall was 1126mm, which is the same as the average between 1986-2000. The longer you take the average the more it evens out. The only global warming happening is in the imagination of taxation grabbing politicians.
http://www.predictweather.com

Probably a bit early to call without more extensive study. However, if this impression solidifies in the next few decades it will be in agreement with some projections: