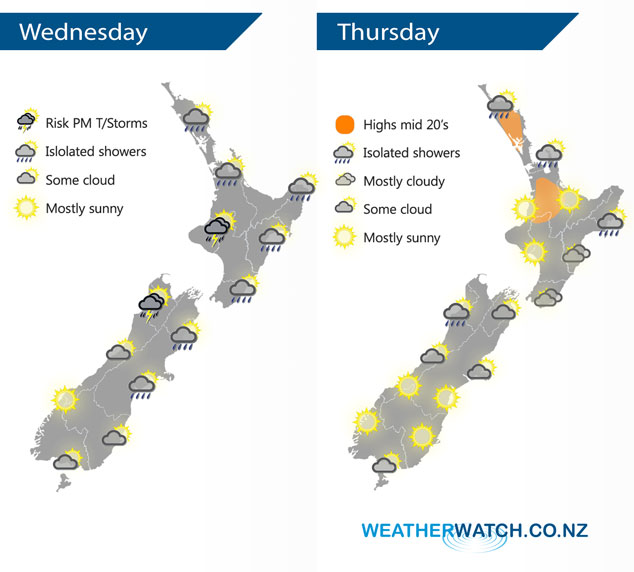 A southwesterly airflow lies over New Zealand today, potentially becoming unstable for Buller and some parts of the upper North Island this afternoon. An anticyclone lies over the South Island on Thursday, southeasterlies further north.

Conditions may be dry this morning for most of the upper North Island however isolated showers move in during the afternoon, isolated heavy falls possible for Waikato and Taranaki across to East Cape, there may even be some thunder. Sunny spells in the east, risk of a shower. Wellington is mostly cloudy with any morning showers clearing, some sun may break through from afternoon. Mostly sunny for the West Coast, isolated showers develop for Buller in the afternoon, a risk once again of thunder. Mostly cloudy for Canterbury through to Nelson, morning showers clear although Nelson sees the odd shower for much of the day. Morning cloud clears Southland and Otago then becoming mostly sunny.

A few isolated showers about the Coromandel spread into Auckland / Northland during Thursday afternoon. Cloudy areas in the east with the risk of a shower about the coastal fringe, especially Mahia Peninsula. Mostly sunny for the rest of the western North Island. The South Island has a mostly sunny day, morning cloud for Canterbury and Marlborough clears. The odd shower moves into Buller at times.