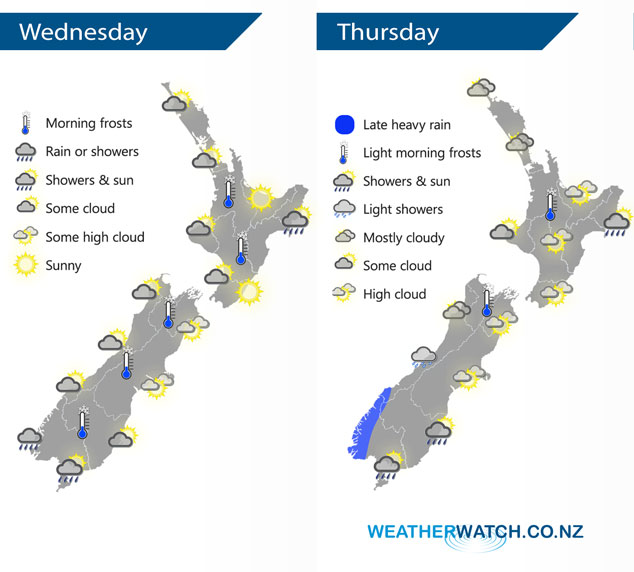 An anticyclone lies in the Tasman Sea today spreading a ridge over New Zealand. A northwesterly airflow slowly builds over the South Island during Thursday while a ridge of high pressure lies further north.

A mostly sunny morning for Northland through to Waikato today, some cloud may drift in from afternoon. A sunny day for the Bay Of Plenty. In the west Taranaki southwards through to Kapiti expect cloudy areas and some sun at times. Gisborne sees a few morning showers then sunny areas break through from afternoon, Hawkes Bay is mostly sunny after morning cloud, sunny for the Wairarapa.

Some cloud for the western South Island with the odd shower about Fiordland turning to rain at times from afternoon. Sunnier in the east with increasing high cloud. Southland has a dry morning then some rain moves in for the afternoon, easing back in the evening.

Cloudy periods for areas north of Auckland on Thursday, mostly sunny elsewhere for the North Island however expect some high cloud. There may also be a shower about the likes of Mahia Peninsula and coastal Gisborne. Cloudy for the west of the South Island, the odd light shower about, late rain for Fiordland becoming heavy overnight. High cloud in the east, a few morning spots of rain for Southland and Otago then again overnight.