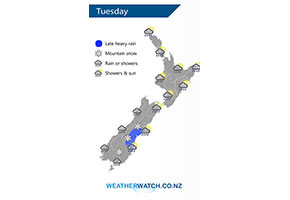 An area of low pressure forms and crosses over the South Island on Tuesday moving in a west to east fashion, this induces a cold south to southwest airflow to develop about the far south.

Showery conditions for much of the western North Island on Tuesday, easing by evening and long dry spells developing. Overnight heavy showers move into western coastal areas. The east coast of the North Island has a dry morning then spots of rain may spread from the west late afternoon / evening.

Expect a period of early heavy rain for the West Coast of the South Island then easing, rain picks up again late afternoon / evening. Morning showers for Nelson / Marlborough then some sun breaks through. Canterbury is mainly dry with high cloud then showers move into South Canterbury late afternoon, turning to rain in the evening and becoming heavy, rain moves into North Canterbury overnight. Dry to start for the far south, showers move into Southland during the morning then Otago during the afternoon as southwesterlies freshen. Snow gradually lowers to 300m about the ranges. 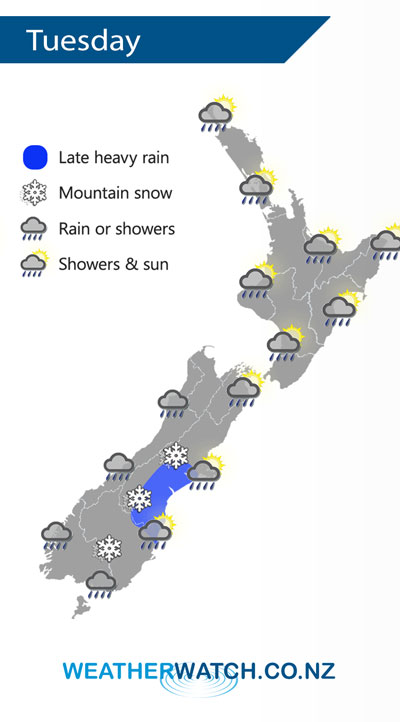