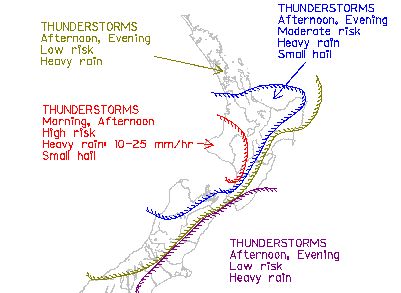 A few rumbles of thunder boomed across the Waikato yesterday but overall thunder activity was fairly low around New Zealand, however this afternoon the risk is slighly elevated as a cold front moves up the country.

From MetService:  There is a high risk of thunderstorms from Waitomo to Manawatu, possibly squally. A larger area of moderate risk covers North Island areas from Waikato and Bay of Plenty to the Horowhenua Kapiti Coast, with a low risk over the remainder of the North Island, apart from the east coast. If any thunderstorms eventuate they could locally boost rainfall rates up to 25mm per hour.

There is also a moderate risk of isolated thunderstorms over the northwest of the South Island this morning and early afternoon. An area of low risk extends down through the Westland and the Main Divide.

A southerly change is expected to move over east of the South Island this afternoon, reaching the lower North Island later in the evening, bringing showers. Some of these showers could be heavy with a low risk of isolated thunderstorms, as indicated on the chart. 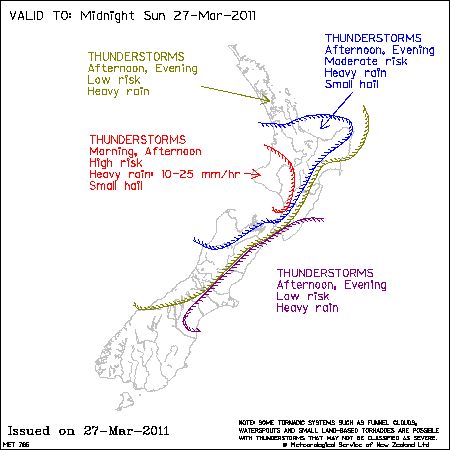 Just had a clap of thunder in the Wellington hills.. Hope for some more.

Thanks for the updats